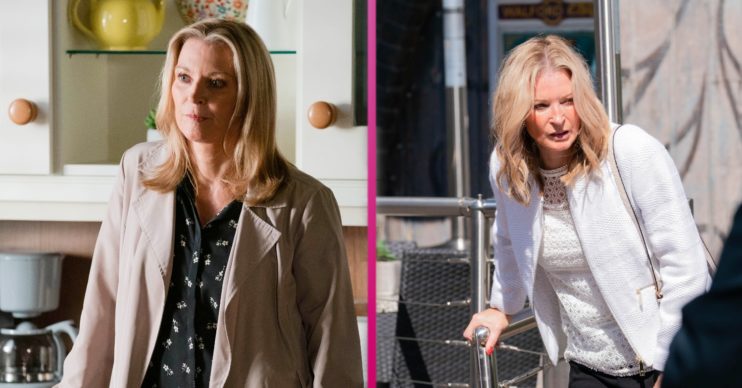 Peter sets Kathy up on a dating app

EastEnders spoilers reveals Kathy goes out on a date, however it doesn’t quite go to plan…

In next week’s scenes, Kathy is excited to get a match on her dating app, a man named Iain.

But Peter later tells Kathy that her son, Ian, borrowed money. And an increasingly anxious Bobby listens on struggling to keep control.

When Kathy is asked out by her match, Peter admits to his nan that he lowered her age on the app.

Later Kathy confronts Ian about they money and says she’ll remortgage the cafe to help him out. But what she doesn’t know is that Ian has already done that behind her back, so he assures her it’s all under control.

Peter later looks for information, sure that his dad is up to something and learns the truth…

Soon, Kathy goes out and meets her date. The date seems to be going well as they hit it off.

But later whilst tipsy, Kathy shows her date The Prince Albert and she trips over.

After Ash examines her ankle, she advises Kathy to go to the hospital. Is she going to be okay?

Meanwhile, Peter is alarmed to find Bobby scrubbing everything clean and counting to five, blaming himself that Kathy got hurt.

Later Kathy feels foolish for lying about her age and Peter tells her not to worry. But he notices Bobby is frantically cleaning his hands and is anxious Peter will tell his secret.

Sharon gets a shock when Denny’s things are returned from the boat accident. When she disappears, Bobby steps in behind the bar.

Ian and Sharon make up

Ian checks on Sharon after seeing her upset over Denny’s belongings and he gives her a birthday card.

She’s grateful for all they’ve been through together, Denny’s stuff reminded her and she misses her best friend.

They make up and apologise for the last few weeks.