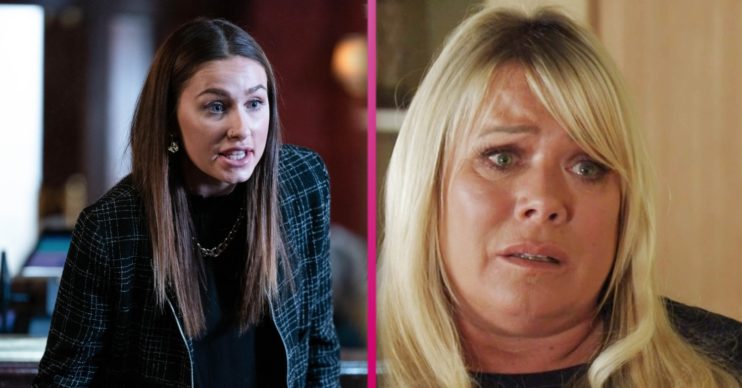 'Series two' kicks off with a bang!

EastEnders spoilers reveal Dotty tells Sharon the truth about Dennis’s death. But what does this mean for Sharon and Ian?

Back in February, before the BBC soap went off air, Dennis was killed in the Thames boat crash. But what Sharon doesn’t know her best friend, Ian, locked Dennis in a room on the boat before it crashed, planning to take him to the police for bullying Bobby Beale.

Despite Ian’s attempts to save Dennis, the teenager ended up drowning. But how will Sharon react when she learns Ian inadvertently played a part in her son’s death?

In next week’s episodes, Ian is happy to have a fresh start with The Queen Vic bust back in its rightful place, now the police investigation into the boat crash is now over.

Later, Sharon spirals to see the bust back and memories of the crash come flooding back. She questions Ian on whether anything of Denny’s was returned, leaving Ian feeling terrible that he blindsided her.

Meanwhile, it’s Dotty’s court hearing after her arrest at Ruby’s club, which was set up by Ian.

Ian and Dotty come to an agreement with Ian changing his statement to drop the charges in return for Dotty’s silence on Dennis. However after being constantly riled by Ian, Dotty is unable to keep quiet any longer.

She storms into The Vic and tells Sharon that Ian is the reason Dennis died.

Sharon is in disbelief as Ian desperately tries to defend himself. Who will she believe?

After Dennis’s death, Dotty heard a voicemail which proved Ian was the reason Dennis was trapped on the boat.

She made attempts to blackmail Ian, however he managed to get out of it.

When he discovered she had been selling Nos canisters at Ruby’s club, he set her up to get arrested.

But how will it play out now Sharon knows the truth?