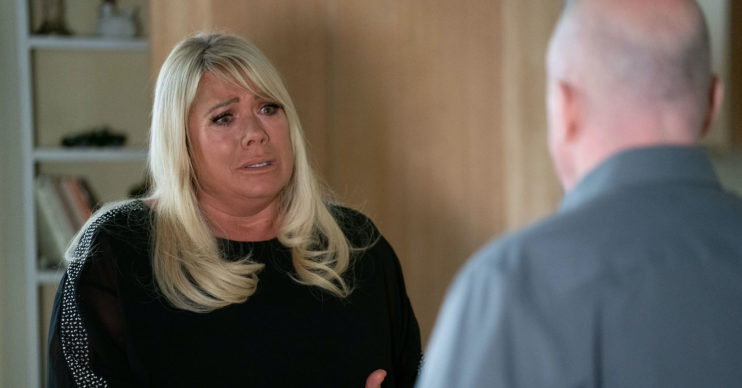 Looks like Phil didn't get his own way after all...

In tonight’s final episode of EastEnders (Tuesday, June 16) it was revealed that Sharon was the new landlady of the The Queen Vic.

Over the last few weeks it’s been suspenseful as viewers wondered who will be the new landlord or landlady of the pub.

Whilst Phil originally planned to buy the business for himself and Sharon, he was thrown when she revealed she wanted to raise her son Kayden – who is the product of an affair Sharon had with Phil’s former employee Keanu.

Last week, Sharon ended up going back to stay with her friend Ian. Meanwhile, Phil has been determined more than ever to get his hands on The Vic.

In tonight’s visit to Walford, Linda was against selling the pub to Phil. She was furious with him after the way he treated her best pal and didn’t want him to get his hands on the business.

However, Mick didn’t want to pull out of selling, due to the fact they already put a deposit on a flat. He also didn’t want Linda to be in the pub any longer, given her drinking problem.

Mick later confided in Sharon about his dilemma, and she agreed that Linda needed to get out of there as soon as possible.

But Phil got a nasty shock when he went to get the paperwork signed. Mick told him and Linda that he had found a new buyer and the paperwork had been completed.

Leading them through to the bar, Sharon was stood behind it with Ian sat on a stool opposite.

As Phil stood there looking stunned, Sharon said: “Hello Phil. What can I get you?” as Ian smiled smugly.

So it looks like in a surprise twist, Sharon and Ian have teamed up and bought the pub together!

Sharon’s history with The Vic

Viewers know that the reason Phil wanted to buy the pub so badly originally was for him and Sharon. But after she chose Kayden over him, Phil did it to get back at Sharon, knowing how much the place meant to her.

Read More: EastEnders’ Tameka Empson will return for spin off show Secrets From The Square

Sharon’s parents Den and Angie were the first on-screen landlord and landlady of The Vic and it was where Sharon grew up.

But how will Phil react now he has been unable to get him own way?

EastEnders is currently off air due. EastEnders: Secrets From The Square will air Monday, June 22 at 8pm.