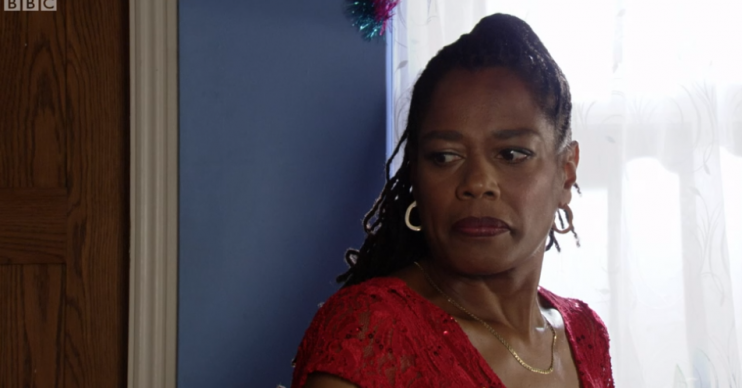 He arrived in Walford last night

The Bulletproof actor made his debut as Isaac Baptiste on the BBC One soap during last night’s (January 1) one-hour flashback episode, in which the character was reunited with his mother Sheree (Suzette Llewellyn).

Stevie said: “I feel very blessed to be a part of such an iconic show.

“Like many of us around the country, EastEnders is something I’ve grown up with so it excites me to be bringing to life the part of Isaac.”

Fiercely confident Isaac is set to ruffle some feathers in Walford, but he is harbouring a secret.

“We’ve teased the character of Isaac – the ‘other man’ in Sheree’s life – ever since her arrival six months ago.

“Today Isaac has arrived on the Square with bravado, charisma and his fair share of charm.

“A teacher with a troubled past, his story will unfold over the coming weeks as we discover just why Sheree has kept him away from Patrick these last few months.”

Fans have already come up with theories as to exactly what’s going on – and who Isaac really is.

Many think he’s Patrick’s son or grandson – now that would be a twist!

#eastenders Isaac must be Patrick’s son!! Also I’m predicting he’s the new bisexual character that was announced a while back!

This Sheree storyline is annoying. I wonder if Isaac’s dad is one of Patrick’s sons. #Eastenders

Is Isaac Patrick’s son or it could be his grandson? #EastEnders @bbceastenders

This Isaac boy must be Patrick son or something #EastEnders

There were also plenty of viewers who aren’t bothered who he is – they were more interested in how sexy he is!

Good job he’s sticking around then!

Ok but Isaac is sexy #EastEnders

This Isaac boy on eastenders is cute

Nah this Isaac on Eastenders is SEXY