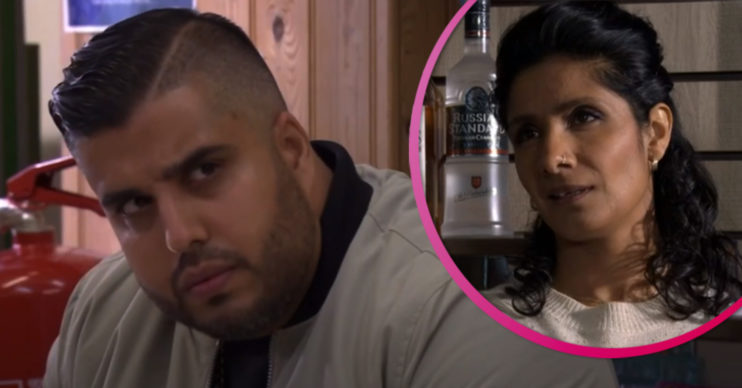 The bumbling character was sent to prison by his scheming mum

Has EastEnders revealed Jags Panesar is set to be murdered in prison after mum Suki set him up?

The bumbling rat catcher was sent to prison by his mum Suki’s scheming as a punishment for disobeying her.

She framed him for Vinny’s attack on Martin Fowler – and now it could cost him his life.

However, Suki is terrified.

Viewers have seen Suki become more and more desperate to get her hands on some cash with no idea why.

Read more: What is FGM as EastEnders starts new storyline for Mila?

And last night she contacted dodgy gangster Stas and offered to launder much more cash than she could realistically handle.

Desperate, she agreed to all his terms. Until Kheerat walked in and ruined the deal.

Stas stormed out and Kheerat let her have it and pointed out that bringing Stas back could see him and Vinny killed over the gold theft.

However Suki was still desperate and later admitted everything to her eldest son.

“I’m trying to help our family,” she said.

“This is about Jags. He’s got himself into a bit of trouble, typical Jags. Letting his mouth run away with itself.

“He’s ended up in a fight with the kind of men you don’t win against.”

Suki added: “They want money, Kheerat – protection money. I wouldn’t lie about something like this.

“I tried to tell you but you were distracted. If we don’t get one hundred grand within 48 hours, Jags won’t make it out of prison alive.”

However fans are calling out Suki’s hypocrisy.

One said: “Suki worries about Jags that shes slags him off at the same time and she’s the one who put him in prison #EastEnders.”

As well as that a second said: “Suki set Jags up and now she cares about him Man facepalming #EastEnders.”

However a third said: “The person to blame for this Jags’s plight is his mother Suki! #EastEnders.”