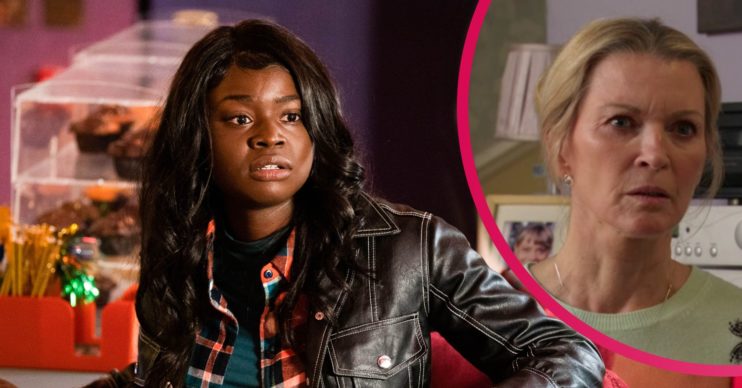 What is FGM as EastEnders starts new storyline for Mila?

EastEnders has confirmed a FGM (female genital mutilation) storyline. But what is FGM?

Earlier this week, Mila Marwa was shocked when her younger sister Kioni showed up in Walford.

As Kioni revealed to Mila that their mum was planning to take her on a trip, Mila looked worried.

In last night’s scenes (Tuesday, May 25) Mila tried to ask Kathy, who she had been staying with, if Kioni could stay for a few nights. However Kathy was against the idea.

When Kathy realised Mila had Kioni in the house, Mila explained to Kathy why she didn’t want her sister going home.

She revealed her mum planned to take Kioni on a trip in two weeks.

Kathy didn’t realise what she meant at first but she looked horrified as the realisation kicked in.

Kathy was horrified. However, she wanted to know how Mila could be certain. The young woman explained that it happened to her.

But what is FGM?

Female genital mutilation is defined by the NHS as a procedure where the female genitals are deliberately cut, injured or changed, but there is not medical reason for this to be done.

It is also referred to as “female circumcision” or “cutting”.

Type 1 is a clitoridectomy – which is removing all or part of the clitoris.

Type 2 is excision – removing part or all of the clitoris and inner labia (the lips that surround the vagina), with or without removal of the labia majora (larger outer lips).

Type 3 is infibulation – narrowing the vaginal opening be creating a seal, formed by cutting a repositioning the labia.

Type 4 is any other harmful procedure to the female genitals such as pricking, piercing, cutting, burning or scraping the area.

FGM has no health benefits and can often cause long-term problems with sex, childbirth and mental health.

The procedure is illegal in the UK.