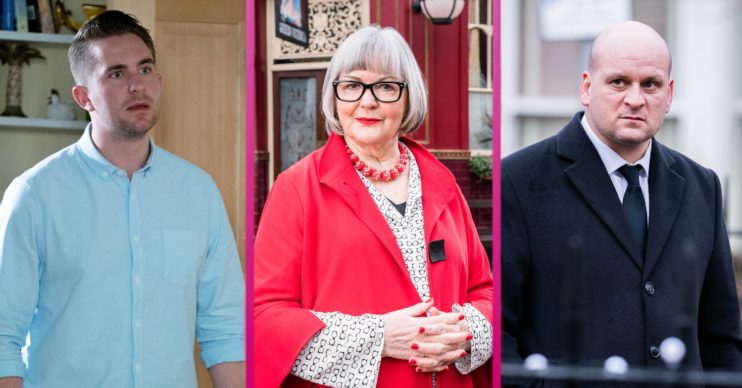 Ben and Callum are planning their wedding

EastEnders has announced Gwen Taylor will be joining the soap as Callum and Stuart’s grandmother Violet Highway.

Violet is Stuart and Callum’s straight-talking Grandma who has no qualms about putting people in their place.

She will arrive in Walford in the run up to Ben and Callum’s wedding. With her hard façade and quick wit, she is sure enough to make someone as tough as Ben Mitchell squirm.

In the past she hasn’t spent much time with her two grandsons. But there is a big heart buried (very deep), so perhaps they will realise they need her more than they realise.

What did Gwen Taylor say about joining EastEnders?

Speaking about joining EastEnders, Gwen said: “I remember when the first episodes of EastEnders launched and I was desperate to be in it, now after all these years, here I am playing a wonderful character.

“It’s fantastic and the cast are great, everybody has treated me so well and I feel extremely welcome.”

Read more: Who is Gavin in EastEnders and why do Kathy and Sharon hate him so much?

Executive Producer Jon Sen added: “Having Gwen join the show is an honour, she’s the perfect actress to play the multi-faceted Violet Highway, a grandmother not to be messed with.

“Stuart and Callum are sure to find this out the hard way when she arrives in Walford for Callum’s big day and they’ll no doubt be wanting her visit to be fleeting but Violet definitely has other ideas.

“We welcome Gwen to Walford and look forward to the audience watching her make her mark.”

What else has Gwen been in?

Gwen is well-known for her many television and theatre roles.

She famously played Amy Pearce in Duty Free. She also played Barbara Liversidge in TV series Barbara from 1995 until 2003.

Read more: Is Lucas leaving EastEnders? Will he die after being beat up?