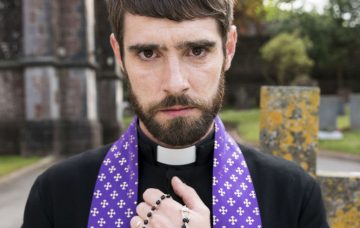 Could Dermott be set to arrive in Walford?

The killer priest was found in spin-off Redwater back in 2017, but despite being Kat’s long-lost secret son, he hasn’t been mentioned since.

Long-time viewers will remember that Kat realised she had a secret son after forgetting she had given birth to him.

But after tracking him down to Redwater – and nearly being murdered by him – Kat hasn’t mentioned it.

Actor Shane Richie previously said there was discussion behind the scenes about whether to bring him in.

Read more: EastEnders fans left questioning where baby Abi is after she ‘disappeared’ from soap

He said: “When we came back, there was talk about ‘Do we back reference the whole Ireland thing?’

“There were certain people who didn’t think we should, and I kind of felt we have to.

“It was always going to be one series we were led to believe and then we’d come back to EastEnders but course the show was never as big as they thought it was going to be, personally because I think Redwater sent out mixed messages.

“But we do talk about certain characters, there’s a scene where Kat and Alfie talk about Dermott so those who have watched will see the link there.

“To not mention it, it just seemed a bit silly, so we do.

“But we don’t harp on about it, because of course at the end of Redwater, Alfie was flatlining, Kat had been eaten by a whale or something, I don’t know, whatever happened there!”

Do fans want Dermott in Walford?

However the brief mention wasn’t enough for fans and now with Kat out of Walford while actress Jessie Wallace is suspended, they want Dermott back.

Especially as Kat left abruptly after a mysterious and important phone call.

One said: “Time to bring Dermott into the show when Kat returns.”

Others want the entire of Redwater wiped from their memories and for Kat to find another secret son.

One said: “What they’re already doing – pretend he doesn’t exist, even though his existence was revealed on the main show.”

Another added: “I agree, but there’s still the mystery of Kat’s secret son.

“If we wipe Redwater from our memories, then Kat still has a son out there somewhere which could pave the way for her to search for him.”

Do you want Dermott in EastEnders? Leave us a comment on our Facebook page @EntertainmentDailyFix and let us know what you think!