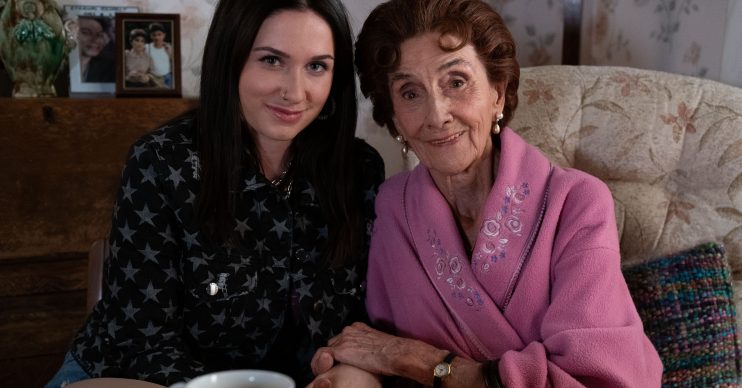 EastEnders star John Altman has claimed June Brown quit the soap over not getting storylines and the recasting of her on-screen granddaughter Dotty.

The 93-year-old soap star quit her role as Dot Branning in February after playing her for 35 years and now her on-screen son has revealed why.

John told the Sun’s TV Mag: “I spoke to her obviously but I don’t want to quote her but I think generally, bless her heart, she’s 93 number one, so she does get very tired these days and number two I don’t think she was getting the best of storylines.

“She’s very much a die hard professional in the business and she wasn’t getting quite what she was… she wasn’t very impressed by some of the writing she was getting.”

He also claimed she was far from impressed with new Dotty actress Milly Zero taking over the role from Milly Conlin who previously appeared in 2008.

Read more: EastEnders fans left questioning where baby Abi is after she ‘disappeared’ from soap

John said: “It was a great shame that Molly Conlin wasn’t brought back as Dotty as well, I don’t think she was very happy about that.

“And nor was I, actually, I didn’t understand why when they had the original actress who’d grown up why they hadn’t brought her back, but that’s up to the BBC.”

He added: “I think all those things I’d mentioned – tired, not delighted with the storylines and a different Dotty.

“She just wasn’t happy anymore so she had to decide to leave, which is a shame.”

How did June announce she had quit?

June revealed she had quit the soap earlier this year in a bombshell interview.

She said on a podcast: “I don’t want a retainer for EastEnders, I’ve left. I’ve left for good.

“I went back to do a good story.

“Alas and alack, when I got back it had gone up in smoke.