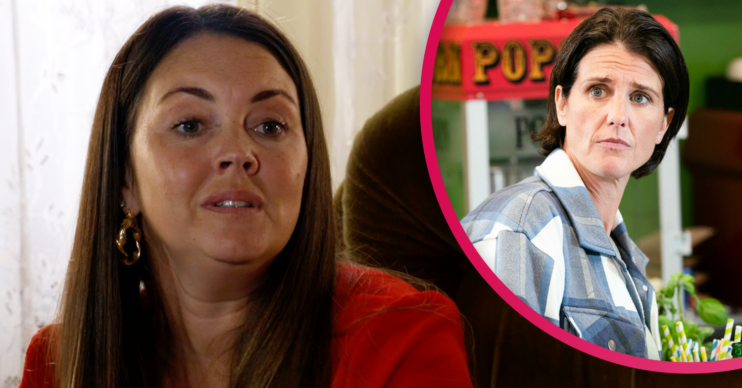 Is her marriage to Eve a 'scam'?

Last night, Stacey was seen telling a shocked Jean that she had tied the knot with cellmate Eve.

However, EastEnders fans are convinced something is afoot, and have taken to Twitter to discuss their theories.

What did EastEnders fans say about Stacey getting married?

And they questioned just what Stacey, who is fresh out of prison, is up to.

Others questioned how “man-eater” Stacey has “suddenly turned lesbian/bi after less than six months inside” and slammed the soap for the ‘cliche’ storyline.

One said: “I think Stacey and Eve will be a sham marriage.”

Another agreed: “I think Stacey married Eve in a scam so she can help her with something.”

A third had an idea as to why Stacey and Eve have tied the knot.

“So with the way the probation officer said Eve needs a home, Stacey married Eve purely for that?” one viewer questioned.

“That has to be a scam. Stacey isn’t a lesbian, she’s slept with half the square.. what is she up to?” asked another.

Others slammed the soap over “predictable” storylines and asked if writers were “running out of ideas”.

“Has #EastEnders ran out of storylines?? How is Stacey married to women after sleeping with half the men on the square?” one fan pondered.

“It makes no sense for them to switch up her character like that,” said another. “There has to be a reason they got married other than love.”

Others questioned Stacey’s choice of partner, and said she’s “never shown signs” of being bisexual.

“Stacey Slater has been married to MEN all her life, now all of a sudden, she’s a lesbian.. yet in all her time there she’s never shown signs,” said one.

“So we’re supposed to believe that Stacey Slater who has been with god knows how many blokes over the years on #EastEnders spends six months in prison and gets married to a woman? Yeah right!” slammed another.

“I’m wondering that as well,” another concluded. “Do they really love each other or is it just a scam?”

There’s one way to find out, tune in when Eve arrives in the square tonight.

EastEnders continues on BBC One tonight at 8.30pm.