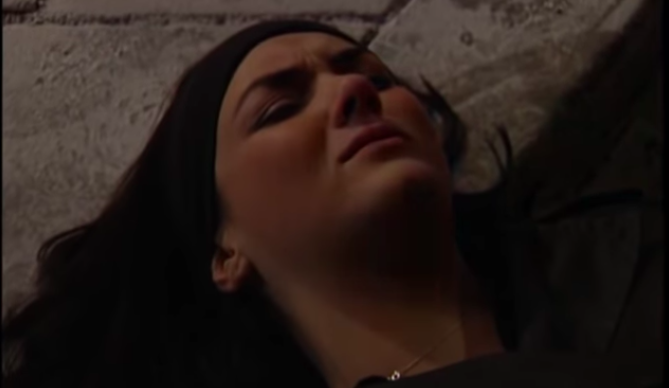 Fans of EastEnders are convinced Louise Mitchell is going to be run over and killed at Christmas – just like her aunt Tiffany Mitchell.

Tiffany died 20 years ago while attempting to flee the country with her own baby Courtney.

She had tried to frame ex Grant Mitchell for her attempted murder, but decided in the end to leave a signed confession to ensure he would go free.

However unbeknownst to her, Grant had already been freed from prison and was on the way back to the Square having discovered she was doing a runner with their baby.

He snatched Courtney back and ran, leaving Tiffany running after him into the Square desperate to get her daughter back.

Sadly she ran straight into the road in front of Frank Butcher’s car and died under his wheels.

And now fans think history is going to repeat itself and Louise will die as Keanu flees abroad to escape Phil’s wrath for his affair with Sharon.

Actress Tilly Keeper has confirmed she is leaving the soap already further fuelling the rumours.

One said: “My money is on Linda hitting and killing Louise in a drunken hit and run on New Years Eve.

“Mick will help Linda cover it up leading to the Mitchells finding out anniversary time leading to Ben killing Mick in a shock storyline.”

A second said: “At this point I’m convinced Louise is dying, caused by Linda drink driving and Keanu being forced to go on the run to stop getting the blame.”

A third said: “#EastEnders I bet Linda will run down Louise as she’s fleeing baby Peggy. Exactly like Frank and Tiffany.”

Fans have been further convinced by the idea with the soap announcing a major new secret forming over the festive period.

The soap teased: “More than one family is torn apart following the past events of Christmas Day and despite Walford’s biggest secret being exposed; an even bigger has now formed.

“Only a handful of people know the truth and whether or not it will remain hidden, only time will tell.

“One thing is certain however, if it ever did come out, the consequences would be catastrophic.”