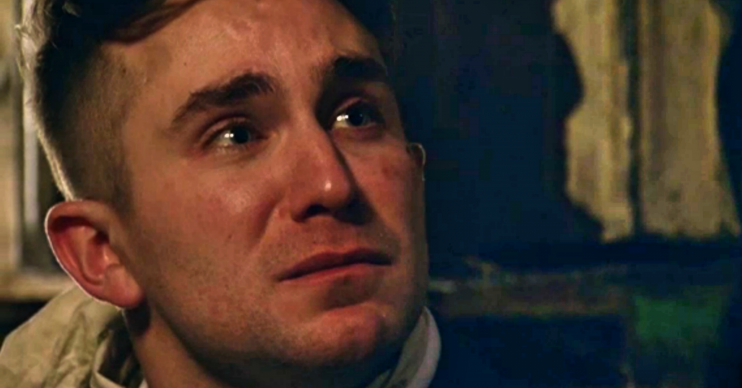 According to Ben's phone, he's been missing for two weeks!

Viewers of EastEnders have been left confused by a timeline ‘blunder’ which suggests Callum Highway has been missing for nearly two weeks!

Eagle-eyed fans of the BBC soap who were watching carefully on Tuesday (February 25) noticed that, according to boyfriend Ben Mitchell’s phone, Callum has been missing for a fortnight.

So surely he would be dead by now?

Those of you who watched the dramatic Thames boat disaster scenes in which Denny Mitchell tragically lost his life, will know that Callum was left for dead by revenge-seeking missile Keanu Taylor.

I’m pretty sure that was a continuity error, I don’t think Callum would still be alive if that were the case…

On the day of the boat tragedy, which was meant to be Valentine’s Day in Walford, Callum’s fate hung in the balance after he was kidnapped by Keanu and held to ransom.

The abduction set off a chain of events which led to the boat sinking and the tragic death of Sharon’s son.

Read more: EastEnders’ Dean Gaffney used to keep a chipolata in his pocket on set

Meanwhile Callum’s still missing after breaking free from his captor and attempting to escape – only to fall from a height into a pit of rubbish, growing weaker with every passing second.

Since then, Ben has been desperate to save his boyfriend.

Scenes showed him staring at his last messages to Callum, in which he vowed to find him.

However, just four days later, the date on Ben’s phone read February 25, making it 11 days since his boyfriend went missing.

And viewers were left baffled by the perceived blunder.

One viewer wrote on Twitter: “So they’ve had the time jump. It’s Feb 25 on Ben’s phone and Callum was last seen three days ago according to his phone.

“Except that the boat party was supposed to be on Valentine’s Day… But we just have to go with the new timings I guess!”

So they've had the time jump. It's the 25th Feb on Ben's phone and Callum was last seen 3 days ago according to his phone. Except that the boat party was supposed to be on Valentine's Day… but we just have to go with the new timings I guess! 😬 #EastEnders

I'm confused abt the timeline cos the messages on bens phone says today's date so that means callums literally been laying there for several days? #EastEnders

Another said: “I’m confused about the timeline because the messages on Ben’s phone says today’s date so that means Callum’s literally been laying there for several days? #EastEnders.”

A third added: “Are EastEnders not sticking with the dates here then? If Callum was left alone on Valentine’s Day as it said on Ben’s phone… But now it’s February 25 and no one saying it’s pancake day.”

“I was thinking this myself. Ben’s phone said 25 Feb and the boat party was Feb 14, but the messages also said last read three days ago. It’s a big mess of continuity,” said one, and another added: “I’m pretty sure that was a continuity error, I don’t think Callum would still be alive if that were the case…”

One viewer pointed out that Denny’s death online is also recorded as February 21 – the date the episode aired, rather than Valentine’s Day.

Following the boat accident, Ben suffered a head injury which caused additional loss of hearing, and he is finding it hard to communicate.

This week, the soap announced it will introduce a new character to help Ben come to terms with losing his hearing.

Newcomer Frankie, played by deaf actress Rose Ayling-Ellis, will be the first deaf character to appear on the soap.

Do you care about Callum being found? Leave us a comment on our Facebook page @EntertainmentDailyFix and let us know what you think!