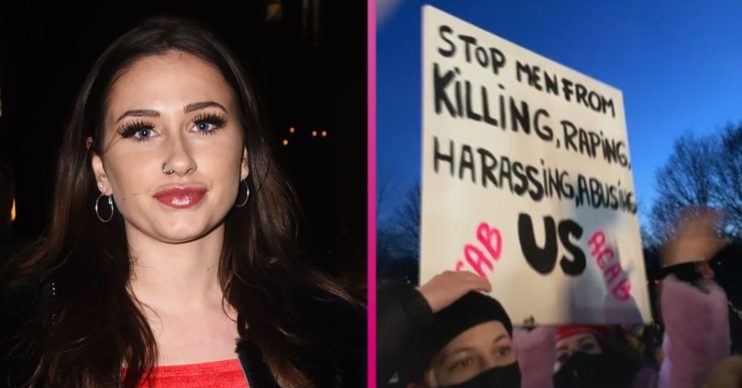 The soap star attended the vigil for Sarah Everard

Milly Zero, Dotty in EastEnders said she was “threatened” by police during a protest over the death of Sarah Everard.

What happened with Milly Zero, who plays Dotty in EastEnders?

The Met Police’s conduct has attracted widespread condemnation from politicians.

And now Milly has alleged that she was “threatened” by officers.

Further to that, she posted pictures of the vigil on her social media showing police surrounding the protest.

Actress Milly captioned the pictures: “Tonight at Clapham before and after. We were peacefully protesting in solidarity for a woman [allegedly] murdered by a police officer.

“We were then physically pushed aside and threatened by… the police.”

However, she later assured a fan she was fine. She said: “I am completely fine!

“It was just really sad to see. They could have been there to keep people socially distanced but instead they turned it into something completely different.”

He tweeted: “The scenes from Clapham Common are unacceptable.

“The police have a responsibility to enforce COVID laws but from images I’ve seen it’s clear the response was at times neither appropriate nor proportionate.

“I’m contact with the Commissioner and urgently seeking an explanation.”

However, Home Secretary Priti Patel has also ordered a report into the handing of the protest.

Met Assistant Commissioner Helen Ball defended the force, telling BBC News: “Police must act for people’s safety, this is the only responsible thing to do.

“We absolutely did not want to be in a position where enforcement action was necessary.

“But we were placed in this position because of the over-riding need to protect people’s safety.”

Earlier in the day, the Duchess of Cambridge, Kate Middleton left flowers for Sarah.

However fans rushed to defend her over accusations it was all just a publicity stunt.

ED! contacted the Met Police for comment on this story.