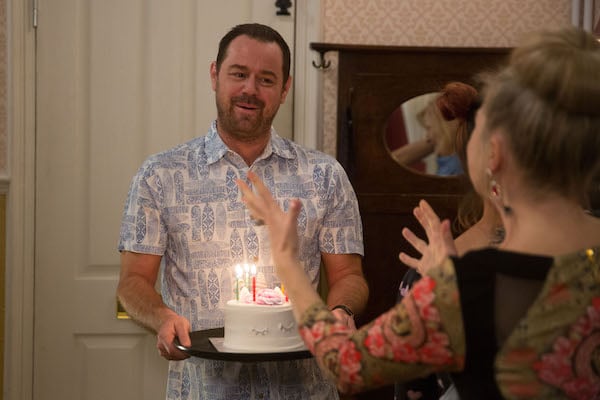 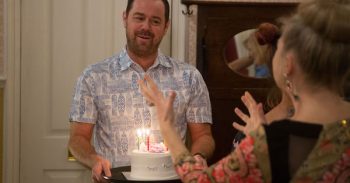 Have you missed him?

EastEnders have confirmed that Mick Carter is winging his way back to Walford any day now.

The pub landlord hasn’t been seen in Albert Square since February, when he and wife Linda left the country for an extended break to attend their daughter Nancy’s wedding to Tamwar.

Read more: EastEnders to air its own Pride march in LGBTQ+ special

The Carter couple had endured a testing few months, with Mick having spent time in prison for a crime he didn’t commit thanks to evil arch-nemesis Stuart Highway.

Linda’s relationship with Stuart while Mick was away – albeit it with the right intentions – caused huge strain on the couple after Mick’s release.

Having steered their marriage back on track, the pair decided to travel to Australia to see their daughter get married.

Read more: EastEnders SPOILER: Max is back with a bombshell for Rainie!

In reality, actor Danny Dyer took time away from the BBC soap to star in a Harold Pinter play in London.

But the star makes a welcome return next Monday (May 6), when he surprises Tina on her birthday.

When Shirley refuses to ‘reveal’ her present, Tina is seriously intrigued… What could it be?

All is revealed when Shirley later leads Tina and Linda out to the barrel store, where Mick has been hiding! A living and breathing human gift.

Naturally, the Carters celebrate both Tina’s special day AND having Mick back home in scenes that will warm the hearts of soap fans.

Future storylines surrounding the family include Mick and co heading off to see the Spice Girls on tour.

We can’t unsee Mick Carter in that dress.

On a more serious note, however, Mick’s enemy Stuart is still living in Walford.

Will the pair ever be able to settle their differences? Or is another showdown coming soon?

Will you be glad to see Mick Carter return? Leave us a comment on our Facebook page @EntertainmentDailyFix and let us know what you think!