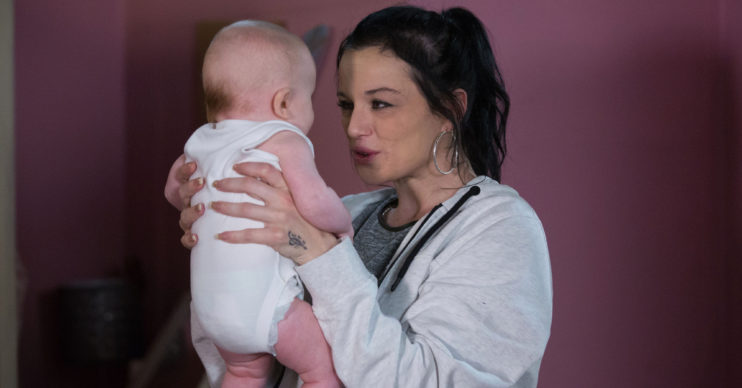 EastEnders has confirmed the exit of Cherry Slater as she reunited with mum Hayley in lockdown.

The toddler has rarely been seen on screen ever since her parents disappeared and left her with her step-mother Kat Slater.

Her alcoholic mum Hayley was hospitalised after trying to kill Cherry’s dad Alfie.

And Alfie kidnapped the baby before eventually giving her to Kat and fleeing Walford himself.

Things took an even more bizarre turn when Kat was forced to leave the Square. She left baby Cherry in the care of her new boyfriend Kush Kazemi.

As far as viewers knew Cherry was being cared for by Kush throughout lockdown, alongside Kat’s other children.

However now official spoilers from the soap have revealed the little one’s fate.

EastEnders’ Instagram account has confirmed that Kat took Cherry back to her mum Hayley prior to the lockdown, then returned to the Square to spend quarantine with Kush.

It is unlikely Cherry will ever return to the Square.

Her on-screen mum Hayley was quietly axed in 2019 with actress Katie Jarvis returning to work as a security guard at a discount store in London.

And Cherry’s dad Alfie is thought unlikely to make a comeback any time soon too.

Actor Shane Richie said last October that he wouldn’t be able to return in EastEnders in 2020 because he had “a busy year”.

And because of current events it is likely those commitments have been postponed until 2021.

He said on This Morning: “I love playing Alfie Moon.

“I miss the people there. I still keep in touch with them. And occasionally I dip in and out of the show and find out if I get a mention!”

But while Cherry is gone for good, Stacey Slater will be back very soon.

EastEnders executive producer Jon Sen said: “The big one is Stacey – we have been waiting for her to come back.

“We have really missed her energy in the Slaters so the first two weeks we tease a mystery – where is she?

“Are all of these things on the going on the Square to do with her then she’s back with a bang.

“There are some fantastic Stacey scenes – especially when she finds out about Martin and Ruby.”