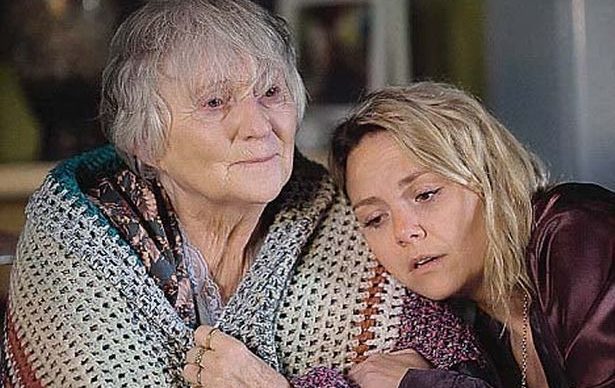 She was best known for roles in EastEnders and Crossroads

The actress played Janine Butcher’s grandmother Lydia Simmonds in the soap from April 2011 until June 2011 – when the character died.

Amanda tweeted: “Remembering the fabulous Heather Chasen who sadly left us yesterday. She was wonderfully eccentric, gloriously funny, and a very special actress.

“There’ll never be another like her. Will always miss her.”

Read more: An EastEnders home could set you back a cool £1.5 million

Heather was also known for roles in Crossroads, The Bill and Family Affairs as well as a role in Les Miserables in 2012.

Fans were devastated by the loss of the talented star and took to Twitter to share their tributes to her.

One said: “Sad to hear that Heather Chasen has passed away at the grand age of 92.

“I discovered The Navy Lark in the late 1990s through audio cassettes I found at the library and particularly enjoyed her performances as WREN Chasen and the ultimate battle-axe Ramona Povey. RIP.”

A second said: “Aww balls. Lovely Heather Chasen has left the party. A regular in #TheNavyLark with Jon Pertwee and Leslie Phillips she went on to play superbitch Valarie Pollard in #Crossroads.

“A proper jobbing character actress. You don’t get many of them any more. RIP.”

A third said: “Of her many numerous television roles I vividly recall watching her in Marked Personal with Stephanie Beacham… Great actress she’ll be much missed.”

A fourth said: “Such sad news. As a teenager I loved #TheNavyLark on Radio 2. I have in recent years enjoyed the repeats on 4Xtra. Very sad news of her passing.”

As a young actress Heather studied at the Royal Academy of Dramatic Arts.

She was a contemporary of Carry On legend Frankie Howerd before landing parts in a series of television plays.

Her last television role was as Lady Altringham on Dancing on the Edge.

Heather married John Webster in 1949 and they had a son together called Rupert.

Rest in peace, Heather. Leave your condolences on our Facebook page @EntertainmentDailyFix.