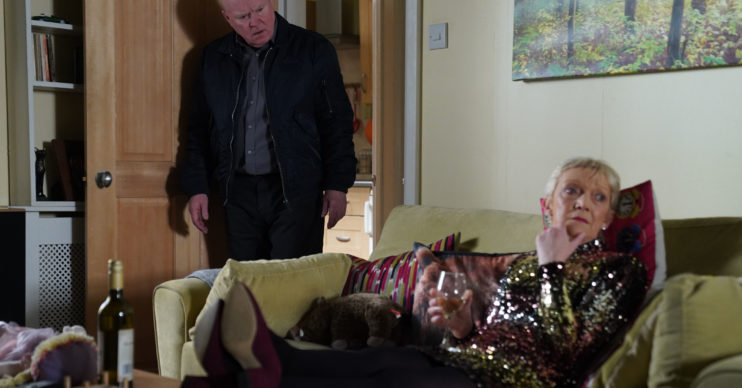 Jean is clearly not well

EastEnders might be about to unite one of the most surprising couples we’ve ever seen: Phil Mitchell and Jean Slater!

Jean, whose mental health is currently in question, decides she needs to bring her daughter, Stacey, home next week.

Stacey is on the run after attacking Phil Mitchell with a wrench, but Phil believes Kat was the one who left him for dead.

However, Jean is convinced Phil knows the truth and that he is the reason Stace is staying away. She feels she needs to persuade him to let her girl return to Walford.

She confides in Shirley that she’s going to see Phil, but Shirl tries to talk her out of it, saying the only way to get through to Phil Mitchell is through seduction.

Read more: EastEnders newcomer Rose Ayling-Ellis: where have you seen her before?

Far from disuading her, Jean takes it as a suggestion she should seduce Phil!

Dressed up to the nines, Jean heads over to see a stunned Phil on Tuesday, May 26.

However, he’s left confused when it becomes clear he still thinks Kat was responsible. What will he do now he knows it was Stacey?

Has Jean just made things a whole lot worse?

What’s wrong with Jean in EastEnders?

Jean has bipolar disorder and stopped taking her medication shortly after a run-in with Suki Panesar.

With Stacey out of the picture and Kat fleeing town for an unknown reason, Kat’s boyfriend Kush Kazemi was left to hold the fort.

Feeling responsible for Jean, when he discovered she wasn’t taking her pills, he and Shirley began slipping them into her food.

However, the plan backfired when Jean collapsed with a seizure. It was revealed she had lithium poisoning.

When she discovered what Kush had done, she threw him, Kat’s kids, who Kush is looking after, and Mo out on the street.

It soon became clear Jean was having hallucinations when started talking to her dead boyfriend Daniel and cooked him a meal.

Kush tries to get through to Jean next week and begs her to let him move back in.

But she’s unhappy he’s forced his way into her home and demands he leave.

It’s not long before Mo makes a worrying discovery and urges Kush to take action. But what can he do?

After the incident with Phil, Shirley tells him Kush he needs to call Stacey, but will he?

Will she come home?