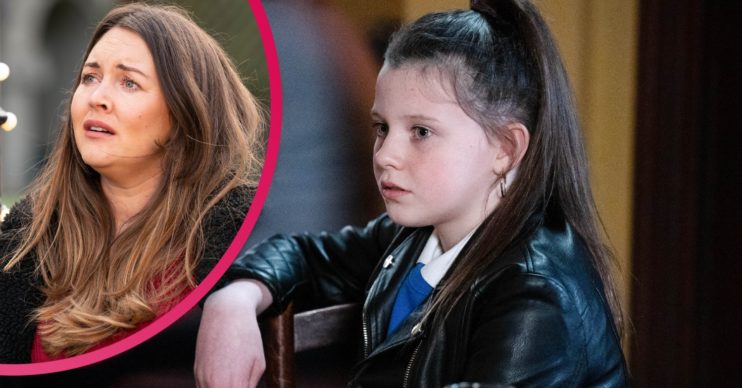 Does Lily die in EastEnders after falling down the stairs?

Lily had an accident!

Lily fell down the stairs in last night’s episode, but does Lily die in EastEnders?

In last night’s scene (Tuesday, March 30), Lily was upset that her mum was facing prison.

Soon Will Mitchell saw that she was upset and invited her to Janet’s party.

At the party, Will told Lily how his mum getting injured seems to have stopped the arguing between Jay and Billy.

Later when Lily returned home, she screamed and viewers heard a thud. As Stacey rushed to see what happened, she found Lily passed out at the bottom of the stairs.

But does Lily die?

Does Lily die in EastEnders?

Later this week, Stacey and Jean are frantic, especially with Stacey’s hearing looming. Meanwhile Martin tells Ruby that he’s worried about the kids.

Soon Stacey and Martin have a final showdown, but Jean reassures Stacey she’ll take care of everything at home. Stacey is soon saying an emotional goodbye before heading off with her holdall to await her fate.

It seems Lily survives her fall. After Stacey leaves, Jean is rushed off her feet looking after the children.

After pretending to plan an afternoon tea party, she sends Jean to get supplies. However as soon as Jean leaves, Lily starts packing a suitcase.

Where is she going?

Why is Stacey facing prison?

A couple of weeks ago, Stacey and her former best friend Ruby got into an argument.

As Stacey stormed up the stairs in Ruby’s club, Ruby followed her and ended up slipping down the stairs.

She later told Martin she lost the baby after the fall, but viewers know she suffered a miscarriage before  the accident.

She then claimed Stacey pushed her. Although one set of CCTV footage proved Stacey didn’t push her, another set of footage showed that she did.

Ruby deleted the video that would’ve proved Stacey’s innocence and it looks like Stacey will be facing time in prison.