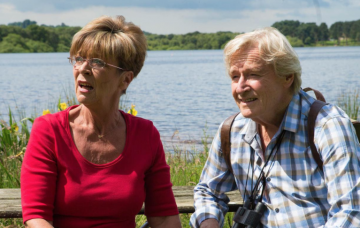 Anne passed away from breast cancer in 2015

Bill Roache, who plays Ken Barlow in Coronation Street has paid tribute to late co-star Anne Kirkbride on the five year anniversary of her death.

Anne played Bill’s on-screen wife Deirdre in the soap for decades before dying of breast cancer in 2015.

Now Bill has remembered his late friend in a new interview.

He told the Mirror: “You were never short of a laugh with Annie and that’s what we remember about her most.

“But I really loved her and she loved me, in a really good sense. We had our private lives, but on screen you couldn’t have had a closer thing to a real marriage, which was lovely.

“All the happy side – well, we had a lot of the unhappy side, but we enjoyed that!

“We would always have a laugh, even during rowing scenes.”

He added: “I miss her company, you felt better for being with her. But we have a laugh about her and the things she did. We have happy memories of her here.”

The Corrie set still pays tribute to Anne with a large picture of her on the wall and her old dressing room still bearing her name.

A source previously told the Daily Star: “No-one could bring themselves to remove the name plaque so it will just stay.

Soap favourite Beverley Callard revealed in 2016 that the picture of her beloved friend had helped her cope with returning to work after she took six weeks off from Weatherfield to recover from severe depression.

She said: “My first day back at Corrie was nerve-racking.

“But I’ve got the most beautiful photo of Annie on my dressing room wall.

Do you miss Deirdre on the cobbles? Leave us a comment on our Facebook page @EntertainmentDailyFix and let us know what you think!