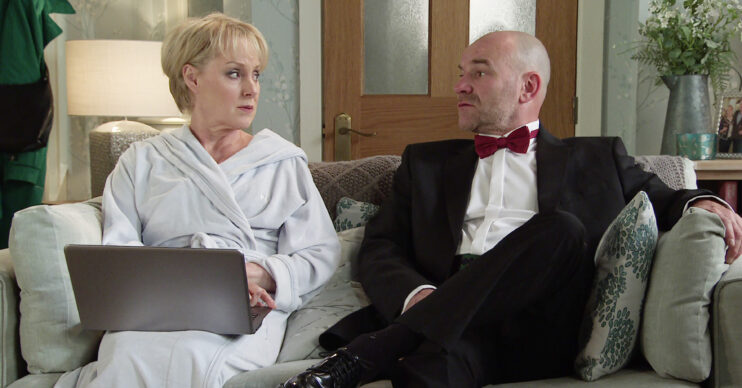 The couple is plunged into another crisis

Coronation Street spoilers for tonight (Monday, August 1) hint that Sally and Tim Metcalfe‘s marriage is heading for the rocks.

Tim is left stunned when Sally tells him to go to Casino Night at the Bistro without her.

Read more: Who is in the cast of Coronation Street 2022? See the full line-up

Spoilers hint at trouble for Tim and Sally in Coronation Street

Feeling hurt and betrayed, she can barely look Tim in the eye as she tells him to go out alone.

Tim does as he’s told, but there’s a further shock waiting for him when he returns home.

He finds a note from Sally telling him she’s made up the spare bed for him.

Is this the beginning of the end for one the strongest marriages on the cobbles?

Corrie fans have seen Tim and Sally struggle over recent months as Tim has suffered with sexual dysfunction.

The couple have tried everything from medication to sex therapy without any success.

Things don’t get easier later in the week either, with Sally suggesting they have some time apart during Wednesday’s episode.

The couple exchange harsh words as Sally accuses Tim of shutting her out, while Tim says Sally is giving up on him.

Tim confides in Aggie, but is this another betrayal?

Luckily for actor Joe Duttine, who plays Tim, his IRL love life is in much better shape.

He’s recently tied the knot with his own Sally, fellow actor Sally Carman who plays Abi alongside him in the ITV soap.

Joe and Sally said ‘I do’ last month and Sally recently revealed a name change on her Instagram account.

Following her nuptials in July, the actress now goes by Sally Carman-Duttine on the social media site.

Elsewhere tonight, it looks like there could be a second chance at love for Ken and Wendy.

Ken makes the first move, approaching Wendy and asking her if she’d like to have coffee with him at No.1.

Wendy accepts his offer and is touched when Ken shares his lasagne with her (this is not a euphemism, get your mind out of the gutter, please).

He tells her that he knows what it’s like to feel lonely as he still misses his late wife, Deirdre.