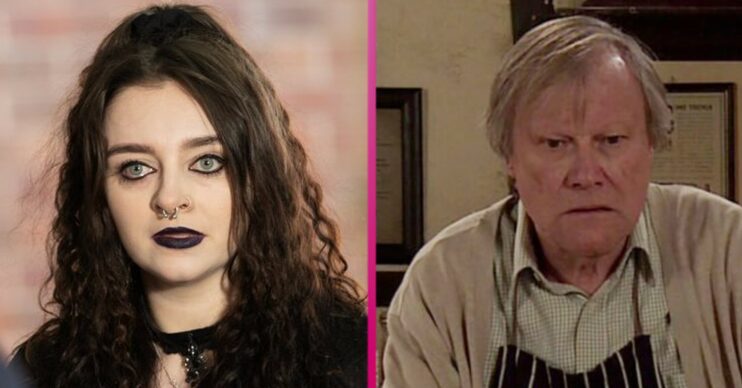 Roy is faced with a tough decision

Nina Lucas will be left terrified her uncle Roy Cropper plans to take his own life next week on Coronation Street.

Actress Mollie Gallagher has revealed cafe worker Nina will be left fearing the worst when Roy makes a series of major life decisions.

Viewers have watched as Roy has become consumed with guilt over his part in the recent street devastation.

He lied to the police for Abi Franklin – insisting she had nothing to do with the gun she brought with her.

The gun was later used by drug dealer Harvey to kill Natasha Blakeman.

But with the guilt hanging over him, Roy has been snapping out at those closest to him.

And next week he decides he can no longer stay in Weatherfield and cope with what he’s done.

Visiting Adam and Imran he makes arrangements to immediately transfer ownership of his home and business to Nina.

And when he tells Abi to sell his beloved Woody – Nina begins to panic.

Actress Mollie said: “She can see how distraught Roy is and starts to see herself as a curse.

“When Nina finds out that Roy is selling the Woody and putting the flat in her name, she thinks he’s going to end his life.”

However when she finds Roy he reveals the truth.

He isn’t going to take his own life – but he is leaving Weatherfield for good.

And it spirals into Nina’s guilt.

Mollie added: “Nina feels like she’s always linked to the bad things that are happening in some way. She can’t get it out of her head that she is the problem.

“Roy saying he wants to move is really sad because Nina has had a lot of people leave her – she’s lost everyone who means the most to her and now he’s leaving too.

“Her dad died, but this is different as it’s Roy’s choice. She’s gutted and tries everything to persuade him to stay.

“She tries using words, talking about everyone she has lost: her mum, her dad, Seb and now Roy.”

But will it any of it work? Or will Roy leave for a new life abroad?