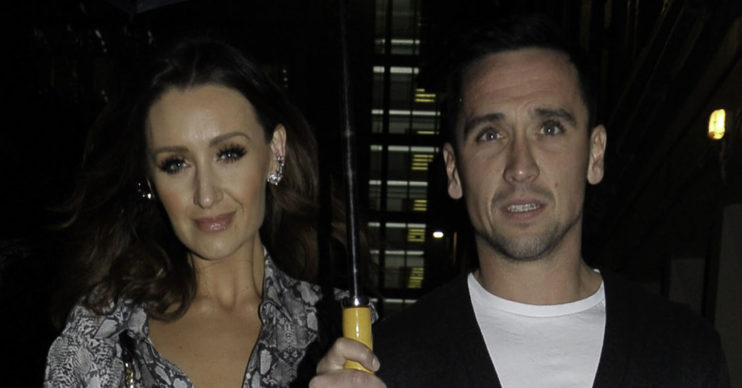 The couple are unshakeable

Coronation Street star Catherine Tyldesley has revealed her husband has watched her film sex scenes and told her co-stars to “crack on”.

The Eva Price actress, 37, said her husband Tom Pitfield encouraged her co-stars after watching them film.

Asked if her husband avoided watching her raunchy scenes, Catherine revealed the opposite.

She told The Express: “No, Tom’s really chilled.

“He’s been on the set with me before at Corrie when I’ve been doing love scenes, although maybe not as X-rated as this.

“I had a scene with Ryan Thomas on Corrie once which was quite full-on and Tom just happened to be on set with me that day.

“I remember Ryan walking past Tom and going, ‘Sorry mate, sorry,’ and Tom was just like, ‘It’s fine, fill your boots, crack on.’

Actress Catherine recently revealed how starring in Viewpoint ruined her chances of a Corrie comeback.

Her character Eva Price now lives in France with her baby.

And while she’s been mentioned she hasn’t been seen since 2018.

She told Digital Spy: “There was a storyline last year where Leanne’s little boy Oliver got very poorly and unfortunately died.

“And it made total sense for Eva to come back because why wouldn’t she? It was so unfortunate that I’d already signed to do Viewpoint and the dates, we just couldn’t make it work.”

Read more: Kate Ford reveals she was once told to ‘ditch the robe’ during an audition

However, she added: “As a Corrie fan, I felt like I’d let people down! I’m not one of those actresses that will say ‘no I’m done with Corrie I won’t go back’.

“I felt like they presented me with this storyline and I was like ‘oh my gosh yeah of course she’d be there, it’s her sister’.

“And I was just really gutted actually that we couldn’t make it work.”