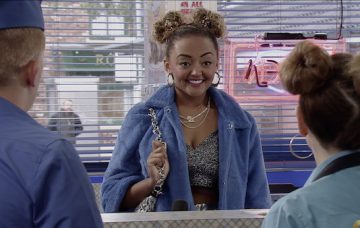 Soap hairdresser has changed up her look herself

The 25-year-old star – who plays trainee crimper Emma Brooker in the Weatherfield soap – was attending a performance of musical Annie, which has transferred to Manchester from the West End.

Known for her blonde curls, Alexandra seemed to be paying tribute to the production’s title character with a sleek, strawberry blonde bob.

But according to her social media, the striking change in Alexandra’s appearance may not be as huge as it first appears.

Sharing a snap of her ‘date night’ on Instagram, the soap favourite hinted her new ‘do was in fact a wig.

“Trying to be Annie in @hairarvina,” she noted in the caption.

According to some reports, luxury hairpieces of a similar appearance can go for as much as £950.

Fans were blown away by the head-turning style choice, hailing the Audrey’s apprentice actress as “gorgeous”.

“Oh wow, I didn’t recognise you! You look stunning,” added another.

Unlucky-in-love character Emma first appeared on the cobbles in April 2018, having a brief fling with David Platt as he struggled with his rape ordeal.

Since then the sweet-natured hair salon hopeful has been romanced by Chesney Brown – but he seems to have turned his attentions to Gemma Winter.