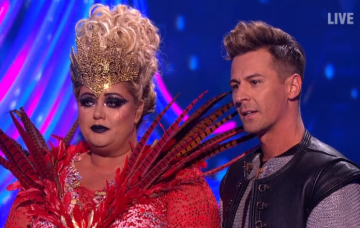 She wants to become one with the ice again

Gemma Collins has hired a psychic to cleanse the Dancing On Ice rink of negative energy after her painful fall.

The reality TV star – who was left injured after she took a tumble last month – has turned to a shamanic practitioner called Sue to prepare the studio for her routine on Sunday (10.02.19) and claimed the “energy” in the room has been impacting her performance.

In a video shared to her Instagram Stories on Wednesday, she said: “I’ve brought a psychic into the ice today to cleanse the energy for my performance on Sunday.

“There’s very bad energy in this corner and it’s affecting the performance. We are gonna banish out all the bad energy for this Sunday. Hell yeah!”

Gemma also revealed clips of Sue moving around the studio chanting and carrying out rituals to “cleanse” the space.

The TOWIE star added: “She’s banishing away the negative energy since my trauma of the fall on the ice.

“She’s getting me at one with the ice again. Go on, darling!”

Her plan comes after the ITV show’s associate creative director Dan Whiston suggested that Gemma’s fall has “cursed” the other contestants.

Actress Melody Thornton damaged her left shoulder and hit her chin on the ice when she slipped during rehearsals, while Jane Danson fainted just hours before the show on Sunday (03.02.19).

Love Island star Wes Nelson also hurt himself – damaging his knee – during training, and cricketer Ryan Sidebottom was back on the rink after missing the performance on January 27 because of a groin strain.

Dan recently told The Sun: “It was really, really awful.

“It was almost as if Gemma’s fall from last week’s show… it was a sign of things to come. Everyone was getting injured.

“She’s got black knees, they’re so bruised, she hurt her chest as well. People are pushing the boundaries so there are going to be these injuries.”