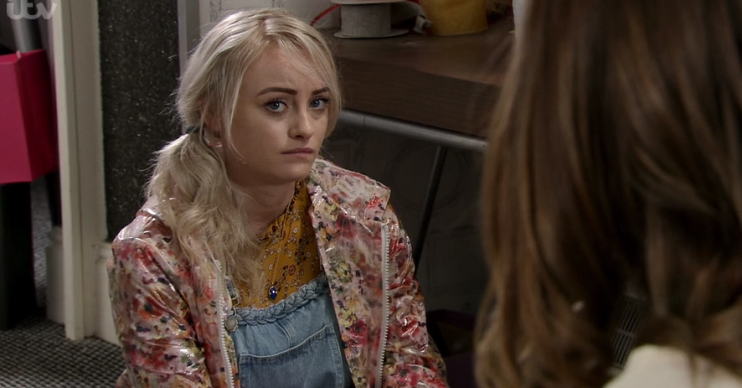 Lisa George posted a picture of them on set

Sinead Tinker looks set to be reunited with her mum before she dies, in poignant scenes to air in Coronation Street next month.

Alison Burrows, who plays Arlene Tinker, has been back filming in Weatherfield and, despite the sadness of the plot, she managed to raise a smile.

Soap fans know that Arlene first arrived on the Street in 2015.

The character, whose wardrobes choices would give Bianca Jackson a run for her money over on EastEnders, will be returning in devastating circumstances as she prepares to say goodbye to her daughter.

Viewers know that Sinead has just weeks to live, after being diagnosed with terminal cancer in her lymph nodes and liver.

Seemingly confirming the character’s return, fellow Corrie star Lisa George – one of the latest celebs to join next year’s Dancing On Ice – shared a photo of the pair in character on her Instagram page.

Alongside a selfie of the two blondes, she wrote: “Always a pleasure working with my on-screen sis and our Sinead’s mum, Arlene Tinker AKA Alison Burrows.”

Fans were quick to comment on the snap, with one writing: “Arlene and Nancy should become regular characters.”

Arlene originally arrived on the street in 2015 to celebrate the wedding of her sister Beth and her then-fiancé Kirk Sutherland.

She disapproved of the match and became determined to cause trouble – openly flirting with Dev Alahan at the reception.

Trivia addicts will probably already know that actress Alison had already appeared on the cobbles before as another character… In 2003, she played Linda Rogerson for a string of episodes.

She’s also appeared as Kathleen McQueen in Hollyoaks, as well as roles in Emmerdale, Doctors, Waterloo Road and Queer As Folk.

Katie McGlynn, who plays Sinead, will be leaving after nearly seven years in the soap.

Do you think Arlene Tinker should become a regular character? Leave us a comment on our Facebook page @EntertainmentDailyFix and let us know what you think!