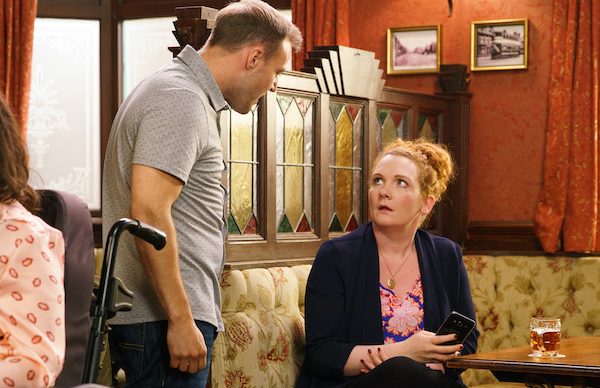 Coronation Street SPOILER: Tyrone accuses Fiz of having an affair?

What secrets has Fiz brought back to the cobbles with her?

Fiz Brown has only been back in Coronation Street for a few weeks but that hasn’t stopped Tyrone Dobbs from already coming to the conclusion she’s hiding a big secret.

After spending months away in Birmingham while daughter Hope attended a school for children with behavioural issues, Fiz has returned to the cobbles in a bid to get her life back to some sort of normality.

But it seems attending the school in Birmingham hasn’t done much to curb Hope’s wayward behaviour because just days after getting home to Weatherfield she was back to her old tricks and setting fire to the factory.

However, it seems Fiz and Tyrone’s problems are only set to get worse when Fiz’s sneaky behaviour starts to worry Tyrone and alarm bells start ringing.

Viewers have seen Fiz taking sneaky phone calls, hanging up as soon as anyone walks into the room… but it has remained a mystery who might be on the other end of the line.

Next week sees the plot thicken when Fiz gets a birthday card from someone called Jade, who was Hope’s old teaching assistant back in Birmingham.

But why would Fiz be such good friends with Jade that she is sending her birthday wishes?

Evelyn spots the card but the moment passes when Tyrone arrives home with Roy in tow, hoping that he can help Hope with her maths studies.

As Evelyn challenges Roy to a maths test, the card is soon forgotten, and when Fiz later catches Hope in the back garden with a box of matches, Fiz decides to hide the truth from Tyrone, worried about what he might say.

However, Hope’s behaviour isn’t the only secret Fiz is keeping from her other half, because when she later gets on the phone to her mysterious caller, she tells them that she misses them and needs them there with her in Weatherfield.

But Fiz isn’t being as secretive as she thought, because this time Tyrone overhears the whole thing and demands to know who she is taking to.

Is Fiz having an affair with someone she met in Birmingham?

Or is there a simpler explanation to all her sneaking around?

Who do you think Fiz is talking to? Leave us a comment on our Facebook page @EntertainmentDailyFix and let us know what you think!