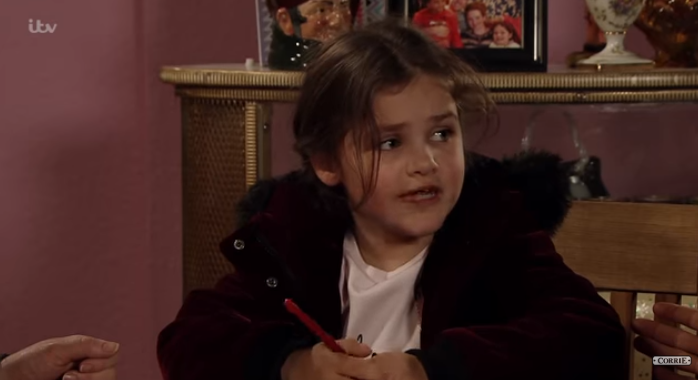 Hope Stape is returning to Coronation Street this week with her mother Fiz, but has the little girl changed at all?

Well, according to a report in The Sun, the answer is no!

Hope originally went to Birmingham with her mum to attend a special school after her behaviour got out of control.

She set fire to a trampoline and framed stepsister Ruby Dobbs for it and she tried to convince her cousin Joseph he could fly and he should jump down the stairs to prove it.

She also put Evelyn Plummer’s dog Cerberus on a tram and refused to apologise, as well as biting Ruby on the arm.

But with Fiz and Hope coming back to the cobbles next week, everyone’s praying her homecoming sees a new Hope.

While Fiz is distractred trying to sort out Hope’s school place, which Tyrone forgot to do, Hope has plans of her own.

“Any idea that Hope isn’t taking after her evil father will be dismissed when she returns to Weatherfield,” a source revealed to The Sun.

“She’s going to hide a lighter in her doll’s head and go exploring on her own.”

After finding herself in the builder’s yard and thinking it’s the perfect place to make mischief, the fire quickly gets out of control.

“Setting fire to some materials, Hope thinks she can make a quick escape but it quickly becomes clear she is trapped with her own furnace,” the insider continued.

“And when the fire gets dangerously close to some full gas canisters the entire cobbles is in danger.”

However, the publication reports Hope will be rescued in time and the blaze put out.

How will Fiz and Tyrone react to this latest stunt?

If a year away at the special school hasn’t helped her, can they find another way to deal with their child?

Hope is the daughter of Fiz and kidnapper and killer John Stape, who was responsible for the deaths of at least two people.

A Corrie spokesperson declined to comment when approached by The Sun.

Are you looking forward to Hope’s return? Leave us a comment on our Facebook page @EntertainmentDailyFix and let us know what you think!