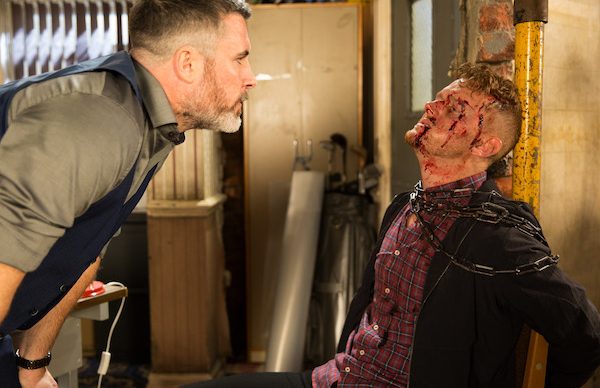 Is this the end for the troubled builder?

It looks like the end could be nigh for troubled builder Gary Windass as Rick Neelan tries to kill him in next week’s Coronation Street.

Soap fans are in for a treat next week as Coronation Street airs a week of special action-packed episodes to run along side the Britain’s Got Talent live finals – and Gary is about to find himself at the centre of the drama.

As Leanne, Sarah and Toyah pay evil loan shark Rick a visit this week, they think they’re cleverly getting closer to working out how Nick Tilsley managed to get the cash to pay for the barbers.

But what they don’t realise is that when they break onto Rick’s office, they have just inadvertently signed Gary’s death warrant by riling up the dodgy villain.

Next week Gary is shocked to find his passport in an envelope, and even more surprised when Leanne reveals that she was the one who broke in and stole it from Rick’s office.

Before he can even get to the family holiday, Gary is stunned to wake up tied to a radiator in Rick’s office.

He knows he’s in deep trouble when Rick accuses him of getting Sarah to break into his office and steal money and passports, and it doesn’t matter how much Gary denies it, Rick just isn’t listening.

But when he is called to sort out a client at the last minute, Gary manages to leave a message on Sarah’s phone, telling her that Rick has kidnapped him and that she is in danger, too.

Oblivious Sarah has no idea that Gary is in trouble, having just assumed that he decided at the last minute not to come on holiday.

But before she can save Gary, Rick comes back and prepares to finish him off for good.

From Monday May 27 to Friday May 31 Coronation Street will air at 9pm, between the Britain’s Got Talent live finals at 7.30pm and the results show at 9.30pm.