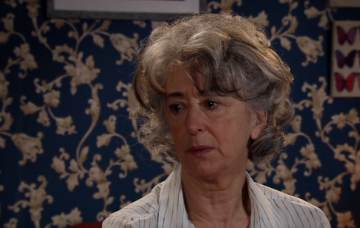 Tyrone panics something sinister has happened

Tyrone Dobbs is left terrified that something terrible has happened to his gran, Evelyn Plummer, when she fails to come home from her holiday in Italy.

Coronation Street fans will know that Tyrone and his gran didn’t part of the best of terms when she left for her holiday last month.

Her departure from Weatherfield came after it was revealed that it wasn’t Tyrone’s mum who left him on the doorstep of a police station as a baby, but that it was actually Evelyn.

Feeling hurt and betrayed, Tyrone told Evelyn not to bother coming back from her holiday, but when she fails to come home with James next week, it seems she might have taken his words a little too literally.

When Evelyn’s holiday buddy James comes back to the cobbles with Evelyn’s dog Cerberus, Tyrone is worried when his gran isn’t with them.

James explains that he became parted from Evelyn and hoped that she had made her own way back to Coronation Street… but if she’s not at Tyrone’s, where is she?

Tyrone panics that something awful must have happened to his gran and the pair set about phoning all the local hospitals to see if they can track her down.

But when their hospital search turns out to be fruitless, Tyrone starts to think something might be seriously wrong and comes up with a new plan to find his gran.

The mechanic explains to policeman Craig that Evelyn has gone missing and was last seen in Paris.

Using his contacts at work, Craig promises to ask around at the police station and see if anyone has heard about where Evelyn might be.

But will Craig be able to track Tyrone’s wayward gran down?

And what happened in Paris that has caused Evelyn to disappear off the face of the earth?

What do you think has happened to Evelyn? Leave us a comment on our Facebook page @EntertainmentDailyFix and let us know what you think!