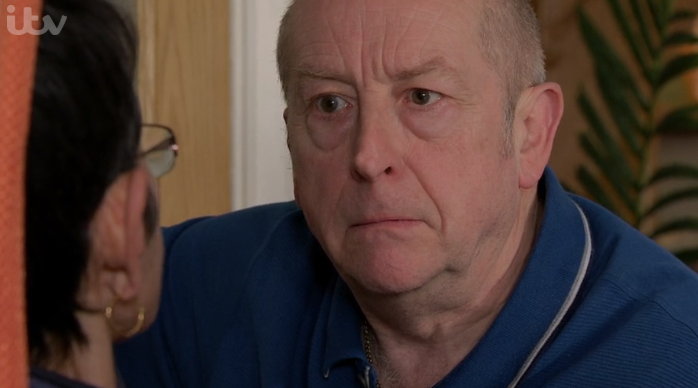 Coronation Street women to join together to take down Geoff Metcalfe

The fightback against Geoff has begun

Coronation Street villain Geoff Metcalfe had better watch out – the women of the cobbles are coming for him.

Evil Geoff controlled and abused his wife Yasmeen until she snapped and defended herself by stabbing him.

But while he has got away with the abuse, Yasmeen is locked up and the street’s residents are increasingly questioning Geoff’s innocence.

And in the coming weeks a group of the cobbles women will unite to take down Geoff – and free Yasmeen.

Geoff’s own daughter in law Sally Metcalfe will unite with Yasmeen’s granddaughter Alya Nazir to trade information to save Yasmeen.

They will be joined by Eileen Grimshaw who has long suspected Geoff’s dodgy behaviour.

Corrie boss Iain Macleod revealed the women will have an uphill battle to convince Yasmeen of the abuse.

“Even if you finally have snapped, it doesn’t mean that you don’t still have this insidious, controlling character under your skin,” he said.

“It’s not that Yasmeen suddenly wakes up the next day and realises that he has been abusing her.

“It’s a slow road for her to accept what she’s been through and see it was abuse.

“We’ll see a lot of her wrestling with what she has done, and her friends and family try to lead her out of the darkness and into the light.

“They try to convince her that she’s actually the person who has been wronged in all of this – that Geoff is not the victim, he is the perpetrator.

“It sucks in loads of characters – Alya and Sally are very pivotal.”

How long until Geoff gets his comeuppance?

But it won’t be a quick ending.

Instead the storyline is set to last until Christmas.

“The timelines have obviously been shunted around slightly due to the lockdown, but I think it’s fair to imagine that it will certainly be this year,” Macleod said.

Read more: Who is Scott in Coronation Street? Suspicious fans have theories

“What form that comeuppance takes is still in discussion.”

But he added: “We wanted a redemptive ending ultimately for Yasmeen.

“She’s in the thick of it at the moment and the toughest it’s going to get for her is around now.

“The ending is towards the end of the year but the key thing is to impart the right message at the end of this story.”