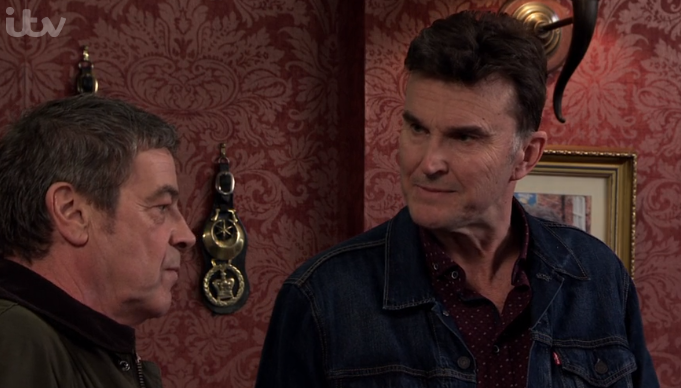 Who is Scott in Coronation Street? Suspicious fans have theories

The mystery man has shown a bizarre interest in Carla

Carla Connor was shown to be suspicious of Scott in Coronation Street on Friday night.

The former factory owner looked at Scott strangely after he tried to interrogate her about her dad Johnny – and revealed himself to be an old friend.

But it’s now just Carla who has questions about the newcomer.

Suspicious fans have theories about who Scott is – and what he wants with Carla.

When Carla first arrived on the cobbles she was married into the Connor family – but years later a bombshell shock meant she was actually a Connor by birth – with Johnny being her biological father.

However with Scott’s arrival fans now think that may not be the case.

Instead they think Scott is Carla’s dad – and he wants to get to know her.

Johnny’s reaction to Scott’s arrival was a strange one.

He seemed put out that Liz was taking an interest in Scott – and not the other way around.

And with there being a very obvious scene of Sean taking an interest and insisting Scott is gay – fans are convinced Scott is Johnny’s secret ex.

It would explain why Johnny was so uncomfortable with him being back – and why he stayed quiet to get Jenny out of there.

After Scott told Carla about his connection to Johnny, he made an intriguing comment that has led fans to think he’s wrapped up in something dodgy.

He told her: “Your dad was a good bloke, but we all have history.”

Fans have jumped on that to think that Scott is a gangster.

And Johnny walked away from the gang in his youth – but now Scott wants him back in it.

A fan said: “I’ve got a feeling Jonny and Scott were involved in some kind of grooming/sex exploration type stuff #Corrie”

Other fans are convinced Scott is more than just an old pal – he’s family.

But far from being Carla’s dad – he is in fact a Connor – and Johnny’s estranged brother.

But why his interest in Carla? Fans are going to have to wait a long time to find out…

Who do you think Scott is? Leave us a comment on our Facebook page @EntertainmentDailyFix and let us know what you think!