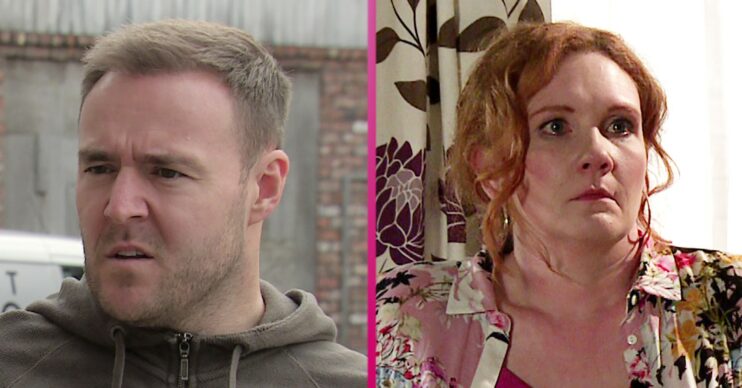 Coronation Street: Will Tyrone and Fiz get back together? Jennie McAlpine has news

Coronation Street star Jennie McAlpine has delivered some bad news for fans hoping that Fiz and Tyrone will reunite.

Fiz and Tyrone split last year after he developed feelings for Alina Pop.

However looks like Phill and Fiz could be over for good after learning his big secret.

Is there any chance of Fiz giving Tyrone another chance?

Read more: Who is John Stape in Coronation Street? Why did Fiz go to prison for him?

Last year, Tyrone began growing closer to Alina Pop while in a relationship with Fiz.

When Fiz told Tyrone she booked their wedding, it became clear he wasn’t happy.

Soon Tyrone left Fiz to be with Alina.

They remained together for a few months, but Tyrone’s daughter Hope wasn’t happy when she found out Alina was pregnant.

Alina had a miscarriage and soon her relationship with Tyrone fell apart.

She discovered she was pregnant again and decided to move back to Romania.

Tyrone tried to stop her leaving, but she told him she wasn’t pregnant and her test was wrong.

Alina left the street, however while she waited for her flight it became clear to viewers she was still carrying his child.

Over recent months he’s been determined to win Fiz back and although she’s been happy with Phill, it looks like it could be in end.

In tonight’s episode of Corrie (Monday, May 23) Hope found out Phill’s big secret and went after revenge on her mum’s boyfriend.

Although Fiz was furious with her daughter, when she found out what Phill had been hiding she was devastated.

It looks like this could be the of for Phill and Fiz. But what does this mean for Tyrone and Fiz?

Will she give him another chance?

Will Fiz and Tyrone get back together?

When asked if Fiz would ever give Tyrone another chance, Jennie told Entertainment Daily and other media: “Would she go back to him? Yes, she would go back in a heartbeat to the Tyrone that was pre-Alina. That didn’t do that to her, that didn’t break her heart.

“That is I think the thing she just can’t get over. So yes she could go back if he hadn’t done it, but she can’t.

“She can’t get over what he did to her and their family, tore it apart.”

Does this mean there is no chance for Fiz and Ty to get back together?

Would you like to see Fiz and Tyrone get back together? Leave us a comment on our Facebook page @EntertainmentDailyFix and let us know what you think.