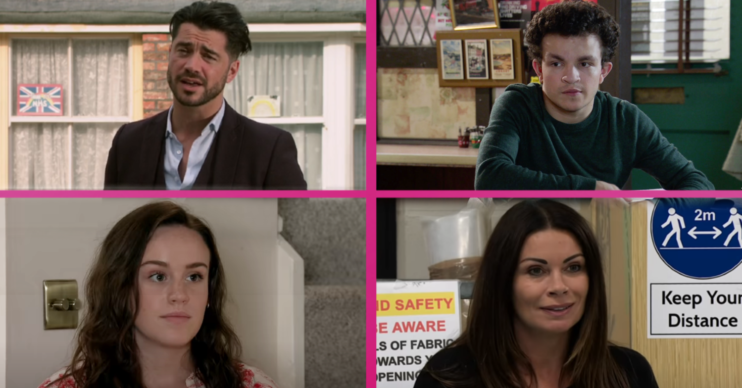 Adam has made quite a few enemies on the cobbles

In the week leading up to his attack, Adam made quite a few enemies on the cobbles.

In Wednesday’s episode (December 9) he was forced to revealed to his uncle, Peter, that he slept with his girlfriend, Carla.

The revelation was overheard by Adam’s wife Sarah.

Later in the episode, Adam was attacked in the Bistro by an unseen assailant. But who could it be?

Coronation Street released an official list on their top suspects.

Peter found out that Adam had slept with his partner Carla. This drove Peter to hit the bottle once more.

But did he attack his nephew?

Carla regrets the night she spent with Adam and begged him to keep it a secret from Peter.

But when Adam told Peter the truth, did he push Carla too far?

Adam and Sarah split up earlier this year when he refused to accept her burying the truth about Gary Windass killing Rick Neelan.

After they split, Adam slept with a string of women, including Carla.

After the revelation, Sarah could be seen slipping back into the Platts’ house after Adam was attacked. Did Sarah attack her own husband?

The solicitor knows the truth about Gary killing loan shark Rick. In the lead up to Adam’s attack, he threatened to go to the police with the truth.

Did Gary decide it was time to silence Gary once and for all?

Who attacked Adam? The fan theories

Fans have also started to come up with their own theories and suspects.

One theory is that Peter’s teenage son Simon Barlow attacked his cousin.

Simon was devastated when he discovered Peter had been drinking again. When Peter told him that Adam slept with Carla he was furious.

Who killed Adam!!??? My money is on Simon Barlow 🧐 #corrie

My money is on Simon attacking Adam #corrie

A case of mistaken identity? Faye Windass or Gary Windass

Some fans have a theory that Adam wasn’t the intended target of the attack.

Faye soon ran out upset. Back at Maria and Gary’s flat, they tried to urge her to go to the police, however Faye didn’t want to.

Fans think that Gary, or maybe even Faye, went to the Bistro to attack Ray, but ended up hurting Adam instead.

Gary as he thought it was Ray. #Corrie

Why the intended victim on #Corrie has to be Ray:
1. Adam was alone in a bar he doesn’t own.
2. It was dark (and there’s no other plot reason except mistaken identity for there to be a blackout)
3. Adam had his back to his attacker
4. Plenty have a grudge against Ray eg: Debbie!

Who do you think attacked Adam? Do you agree with any of these theories, or do you have your own?