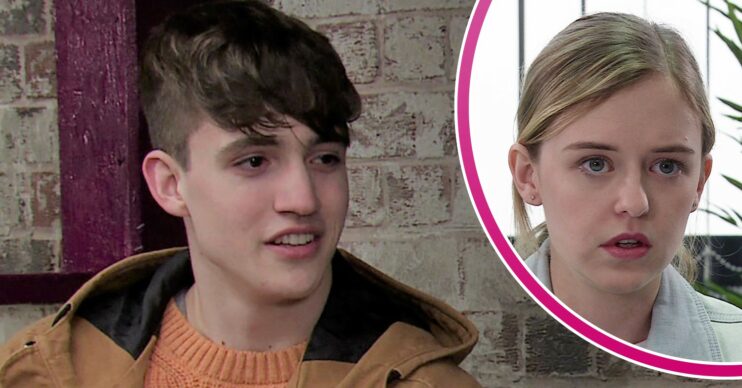 Coronation Street: What is Aaron’s secret? Is he hiding something?

Is Aaron hiding something from Summer?

He began a relationship with Summer Spellman and recently started working for Kevin and Tyrone at Websters’ Auto Centre.

However in tonight’s episode of the soap (Wednesday, July 27) it became clear that Aaron could be hiding something.

Coronation Street: Is Aaron hiding something?

Recently Aaron began working at the garage to try and save up money for him and Summer to go on holiday.

In tonight’s episode Summer started her new job at Underworld and agreed to meet Aaron for lunch.

Meanwhile Aaron went to work and it looked like he sorted out Stephen’s car for him.

However when Stephen’s car broke down, he demanded Kevin sorted it.

Kevin was stressed out already, but Aaron made it clear he needed to be somewhere.

Kevin asked if it was Summer and that he could see her later, but Aaron said it wasn’t Summer and something else had come up.

He then rushed off. But later when Aaron met Summer in the Rovers, she wasn’t happy he was so late.

She soon realised he was in pain and Aaron explained he went home to get changed and was jumped on the way. He showed her a massive bruise on his ribs.

Summer suggested they go to the police and to the walk in centre, but Aaron got angry and went back to work.

Later back at Summer’s, Aaron was on the phone while Summer was out of the room and he was clearly upset.

He said: “Five o’clock, I thought you said it was… No I’m sorry okay I’ll come now. No, please don’t I’ll leave now. Yeah right now. No I’m sorry it’s my mistake I got mixed up.”

It was obvious the other person had hung up and when Summer came back in the room, Aaron told her he had reported the attack to the police.

He then left, but is he hiding something?

Has he got a big secret?

Spoilers: What’s next for Aaron and Summer?

Later this week Summer and Aaron spend the evening alone at her home.

But when Aaron makes a move, Summer pushes him away and orders him to leave.

Later Summer meets up with Aaron again in Victoria Garden and admits she really likes him, but can’t bear the thought of him seeing her naked body.

Next week Aaron goes to see Summer again and tells her he still wants them to go on holiday, but on the condition she goes to counselling to get help with her body image issues.

But is Aaron keeping something from Summer?