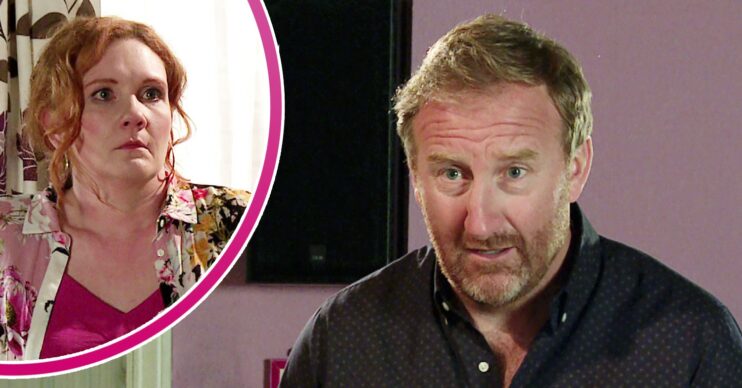 Who is Hope talking to?

Coronation Street viewers think they’ve figured out Phill‘s sinister revenge plan on Fiz after she broke up with him.

Fiz dumped Phill at their wedding reception and went back to her ex-fiancé Tyrone.

After weeks of back and fourth, Phill finally decided to give Fiz an annulment. But has he secretly set out for revenge?

Earlier this month Fiz and Phill got married, but she dumped him at their wedding reception, telling him she didn’t love him.

Fiz went back to Tyrone and told Phill that she wanted an annulment.

But Phill told his wife he couldn’t give her one if she had gone back to Tyrone.

Fiz lied saying her decision was nothing to do with Tyrone. However Phill thought he could try and win Fiz back.

After a couple of weeks and many attempts at romantic gestures, Phill realised it wasn’t working and decided to give Fiz and annulment.

But he ended up finding out that Fiz and Tyrone were back together and Fiz spent their wedding night with Ty.

Phill was furious and changed his mind about the annulment.

In last night’s episode (Monday, July 26 2022) Phill came to see Fiz and admitted he felt bad for how he reacted and that he would give her an annulment.

Meanwhile Hope had began playing an online game and receiving messages from someone called Mad Dog.

Mad Dog asked Hope what her mum and dad are like, if she liked her home, if she got on with her parents and if she had any brothers and sisters.

Hope and Sam talked about Mad Dog and Sam seemed to think Mad Dog had a crush on Hope.

But fans think Mad Dog is Phill and he’s out to get revenge on Fiz by getting to her daughter.

I think phill is up to something. Revenge? #Corrie

Hmmmmm who is Mad Dog? 🤦 Could it be Phil? #Corrie

#corrie Who is this mad dog on hopes pad , Phil ? trying to get revenge maybe?

Who do you think Mad Dog is?

Coronation Street usually airs on Mondays, Wednesdays, and Fridays at 8pm on ITV.