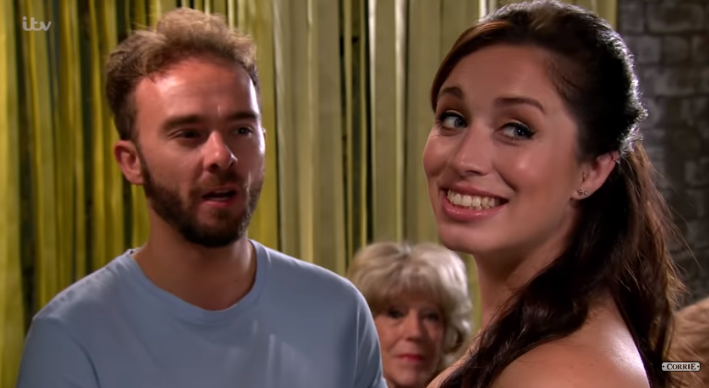 Shona actress, Julia Goulding, is due to go on maternity leave soon

Viewers of Coronation Street have been left baffled over Shona Ramsey’s upcoming exit.

We know Shona actress Julia Goulding is off on maternity leave soon, but with things finally seeming rosy for Shona and David just what is going to lead to her departure?

For weeks Shona has been worrying that her fiancé David wouldn’t be released from prison in time for their wedding, due to him being accused of beating up rapist Josh Tucker.

But in last night’s episode of the soap (November 7 2019), Shona was over the moon to hear David would be home in time for their wedding that day.

As everyone waited in the Bistro, Shona began to panic as neither David nor his brother Nick, who was picking him up, were answering their phones.

Unfortunately for David, Nick’s car wouldn’t start and both of their phones had died.

Wonder how they’re going to write out Shona?

But luckily, David and Nick managed to make it to the Bistro just minutes late and the wedding went ahead.

The couple shared a kiss, then unlike most soap weddings, it all seemed to happen without any drama.

After the ceremony, Nick approached David to tell him the Crown Prosecution Service were resurrecting David’s rape allegation against Josh.

Viewers have been left wondering how Shona will leave the soap since things are looking so good for the newlywed couple.

Wonder how they are gonna write Shona out, she looks ready to pop #Corrie

Well…as Shona will be leaving soon im not too sure about that! #Corrie #CoronationStreet pic.twitter.com/Fl7jYgXaG3

Is Shona pregnant? Does that mean she is going to leave? David cant lose another missus.#Corrie #ThePlotThickens https://t.co/LRYpQCHWf3

Fans of the soap know Julia Goulding, who plays Shona, is pregnant with her first child and is due to go on maternity leave soon.

Will her exit have something to do with David’s rape allegation against Josh resurfacing, or could she go to stay with a relative?

We’ll have to wait and see…

What do you think Shona’s exit storyline will be? Leave us a comment on our Facebook page @EntertainmentDailyFix and let us know what you think!