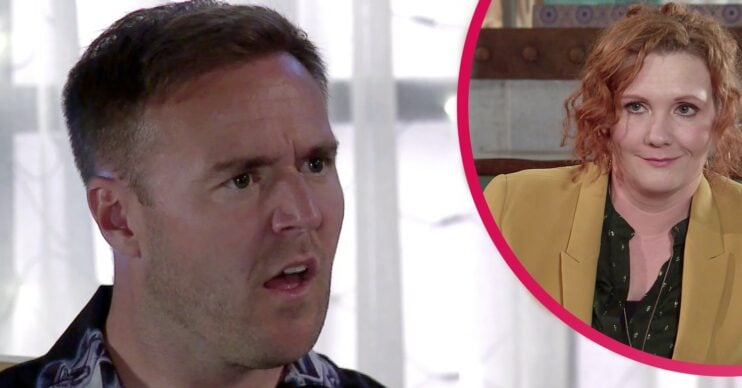 Last week, Fiz was asked by a journalist called Chris to do an article about Tyrone leaving her for a younger woman.

Fiz decided to do the article anonymously. However Tyrone and Alina figured out it was about them.

Alina suggested they do an article telling their side of the story. However when Tyrone asked Daniel to do the story, he refused.

In last night’s episodes (Wednesday, July 21) Tyrone began writing his side of things, but Kevin told him that no one wanted to hear him bad mouth Fiz.

Later Fiz confronted Tyrone over the article and he said he wasn’t going to do it.

Later Tyrone told Alina that he didn’t want to write up the article and Alina wasn’t happy.

However viewers were distracted by what Tyrone was wearing.

The saw Tyrone’s velvet, purple shirt and called it ‘awful’ and ‘horrendous.’

Coronation Street: What’s next for Tyrone, Alina and Fiz?

Later in the episode, Tyrone didn’t look happy to see Fiz out on a date with Phill.

In tomorrow night’s episode (Friday, July 23) Fiz asks Tyrone if he’ll have he girls as she has a second date with Phill.

However Tyrone refuses and tells her that he’s taking Alina out to dinner.

Knowing that Fiz and Phill are going to the Bistro, Tyrone takes Alina there.

But the whole time they’re there, he watches Fiz like a hawk. Soon Alina ends up getting annoyed.

Suffering from a headache, Alina heads home. She leaves Tyrone to pay the bill.

Tyrone can’t resist making snide remarks at Fiz and Phil’s expense. However his bravado turns to embarrassment when his card is declined.

In a bid to make peace, Phill pays Tyrone’s bill and Tyrone is left humiliated.

Soon he takes a drunken swing at Phill causing him to trip. But has he gone too far?