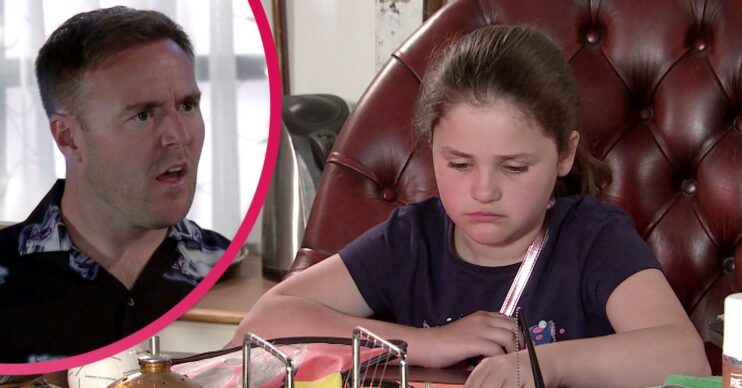 Alina is pregnant with Tyrone's baby

Recently Alina discovered she’s pregnant with Tyrone’s child and they told the news to Tyrone’s daughters Hope and Ruby.

However next week Hope doesn’t appear to be so excited about the baby.

In next week’s scenes Alina tells Tyrone that his jealousy over Fiz is humiliating.

Soon Hope overhears Tyrone and Fiz rowing in the furniture shop. She demands that she needs both of their help with her school project.

Hope continues to work on her project for school, but when she includes Phill in a picture, Tyrone becomes jealous, leaving Fiz amused.

Later Hope becomes upset and accuses Tyrone of spending all of his money on the new baby and nothing on her.

Fiz goes to meet Phill for lunch. At No.9 Evelyn assures Fiz that Hope is fine, however it soon becomes clear things are far from fine.

In the backyard, Hope rips the head off the baby’s teddy and stuff it in her backpack.

In this week’s scenes, Fiz goes on a date with a man named Phill, and Tyrone grows jealous seeing her with someone else.

Speaking about Tyrone’s jealousy, Tyrone actor Alan Halsall told Digital Spy: “He doesn’t take it well that Fiz is moving on – the green-eyed monster is there!

“They’re in the bistro and Tyrone is on a date with Alina too but he can’t stop watching Fiz and Phill.

“It gets to him, he’s not really sure why, but he can’t help himself from making some snide comments.”

He then added that Alina falling pregnant and their life together hasn’t quite worked out how he envisioned.

Alan continued: “He thought he’d seen this exciting new life and now that Alina is pregnant it’s not what he imagined.”

“He thinks that Fiz is just sat at home crying and then when he realises that she’s not he gets very jealous.”

“He takes a swing at Phill and misses and makes a drunken fool of himself.”