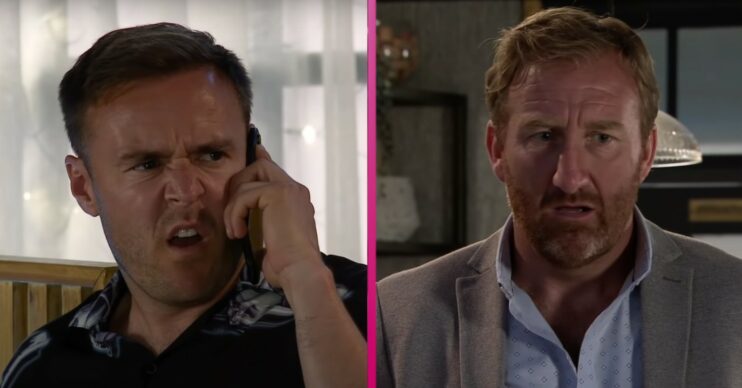 The mechanic got drunk and lashed out last night

Love rat Tyrone left partner Fiz and their daughters to shack up with much younger Alina Pop earlier this year.

After months of feeling angry and bitter, Fiz got her rage out of her system and decided to move on.

She met new man Phil and things have been going well.

However last night during their second date, Tyrone decided to spy on them by taking Alina to the Bistro too.

He got angrier and angrier the more Fiz ignored him and simply enjoyed his date.

Pregnant Alina even stormed off leaving Tyrone to finish off alone and pay up.

But that is when the trouble really started.

Becoming increasingly annoyed that Fiz was having a good time without him, Tyrone couldn’t resist trying to start an argument with Phil.

“Then you can enjoy your romantic little evening in peace.”

However, his cocky taunting soon ended when waiter Curtis told him his card had been declined.

Tyrone tried to brazen it out by phoning the bank to sort it out, but Phil decided to offer him an olive branch.

When Fiz went to use the loo, Phil secretly paid Tyrone’s bill.

But it was thrown back in his face.

“You what?” Tyrone shouted.

“What have you done that for? Give him the money back, he’s not paying my bill.

“You’ve taken my missus, my kids and then you’re in here flashing the cash around.”

As Fiz walked back in, Tyrone tried to punch Phil but missed and ended up sprawled over broken glass, even more humiliated than before.

Coronation Street fans were not impressed and were left disgusted by his behaviour.

One said: “Tyrone is so pathetic #corrie.”

A second said: “Tyrone is such a [expletive]! You have no right to get jealous of Phil and Fiz. PS: Phil better treat Fiz right! #Corrie.”

However a third said: “Tyrone is disgusting! He needs to leave Fiz alone! #corrie.”