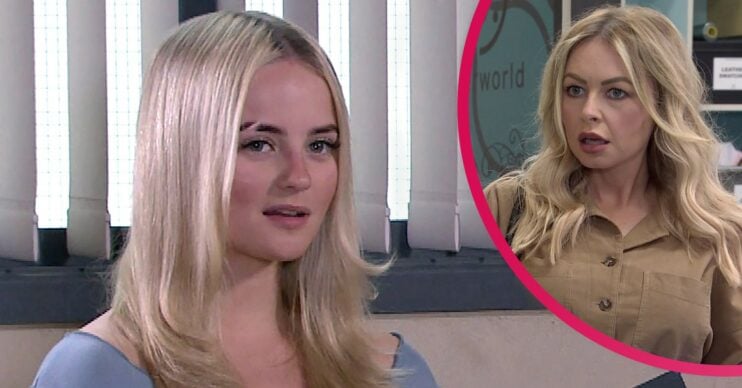 Kelly is currently in prison

Coronation Street spoilers for next week reveal Kelly opens up about her childhood and her mum Laura.

It is known that Kelly hasn’t had a great relationship with her mother. Previously Laura left Kelly by herself and the teenager was put into foster care.

Kelly was fostered by Toyah and Imran, however she ended up getting arrested for her involvement in Seb and Nina’s attack.

Laura returned to Weatherfield just after the attack. However the teenager was charged with murder and GBH.

After hearing that Fiz was offered money for an interview with the Gazette, Laura came up with the idea to sell Kelly’s story.

In next week’s scenes Laura meets up with journalist Chris in the bistro and tells her she wants £30k for Kelly’s story.

But Chris tells Daniel that is trying to sell her daughter’s story. Immediately Daniel warns Imran and Toyah that Laura is trying to flog Kelly’s story.

Toyah and Imran make it clear to Laura that if she sells Kelly’s story to the papers, they’ll report her to Social Services.

A police officer soon arrives at the factory and arrests Laura on suspicion of child cruelty.

Laura blames Toyah and Imran, but who is really to blame?

Kelly opens up about her past

Toyah and Imran go to visit Kelly in prison and assure that she might not have her mum’s support, but they’ll be there for her every step of the way.

A social worker comes to see Kelly in prison. Kelly describes her childhood to the social worker, explaining how her mum would knock her about and go missing for days.