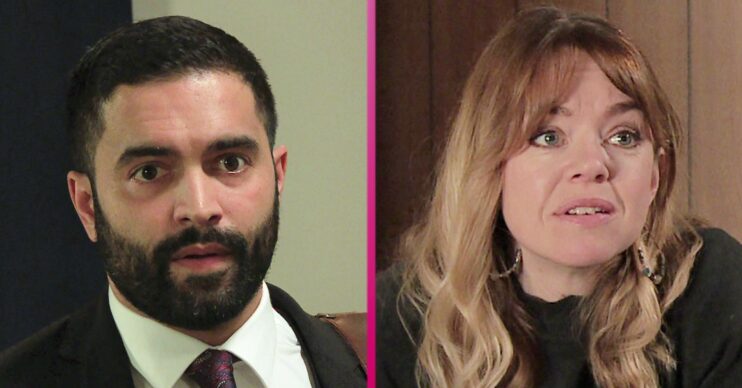 Coronation Street: Toyah and Imran to lose Elsie as Kevin finds out the truth?

Coronation Street character Imran made it clear to Abi he will do whatever it takes to make sure Alfie isn’t taken into care.

However this means he would need to put his name of Alfie’s birth certificate.

Is Imran going to tell Toyah the truth?

Abi gave birth to baby Alfie a few weeks ago and while her husband Kevin knows he isn’t the father, he is unaware Imran is Alfie’s dad.

Meanwhile Imran’s fiancée Toyah has been supporting Abi as she tries to get custody of her son, but she is also unaware who Alfie’s dad is.

Tonight Abi went to court, with Imran representing her, to try and prove she is capable to taking care of her son.

However the local authority solicitor pointed out a list of reasons why Abi shouldn’t have Alfie, including her struggle with drug addiction, the fact her twins were put up for adoption, and that she left Alfie at the hospital after giving birth.

The judge decided Alfie should be taken into the care of the local authority, as the father is unknown and no other family can take him.

Later Toyah could see Imran was upset and he told her he was going to step back from Abi.

But when Toyah told Abi the news, she was furious.

She banned Imran from seeing Alfie and he later went to see her, enraged he wasn’t allowed to see his son.

He told her he would set her up with another solicitor to help and he could put his name on the birth certificate and claim custody as Alfie’s dad.

Later Imran returned home and told Toyah they should focus on the adoption.

But when Toyah was out of the room, he rang Abi and told her he’d pay for her new lawyer.

When Abi questioned what he would tell Toyah, he told her not to worry. But will he tell Toyah the truth?

Coronation Street spoilers: Kevin finds out the truth about Imran and Abi

In Friday’s episode (April 1) Imran tells Toyah he set up Abi up with a solicitor free of charge.

However he secretly heads off with Abi to register’s Alfie’s birth.

When Toyah later bumps into Abi carrying a package, which unbeknownst to her contains Alfie’s paperwork, Abi is acting strange.

Toyah assumes she’s back on drugs and warns Kevin.

Kevin pays Abi a visit and while she makes tea, he hunts for the package.

It’s not long before he finds Alfie’s birth certificate which states Imran is the father.

Meanwhile Toyah and Imran sit down with the social worker to discuss Elsie’s adoption.

But is Kevin about to drop a huge bombshell on Toyah?

In next week’s scenes Toyah comes to terms with the news about Abi and Imran. Has she found out the truth?

She realises she has some decisions to make about Elsie’s adoption. Will she go through with it?

Later Abi is surprised when she gets to the hospital and finds Toyah in the neonatal unit gazing at Alfie in his incubator.

The next day, Imran says an emotional goodbye to Elsie before telling Abi he will help her fight to keep her son.

But Toyah has some bad news. It turns out social services have reported him to the Solicitors’ Regulation Authority for his involvement in Abi’s custody battle.

Could Imran lose his job?