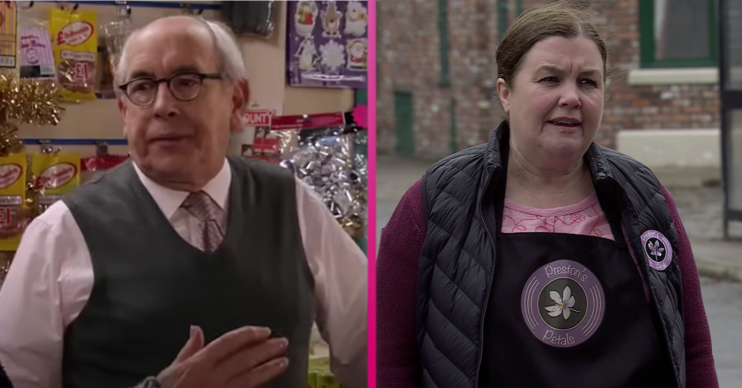 The special will be on at 8pm

Sally Lindsay, who played Shelley Unwin in the soap from 2001 until 2006, narrates a tribute to Malcolm Hebden and his character Norris Cole as they both bid farewell to the cobbles after 26 years.

Malcolm originally made his debut in Corrie in 1974 playing a Spanish character called Carlos.

Twenty years later he returned as Norris, who befriended Derek and Mavis Wilton. He eventually became a regular in the The Kabin.

The programme features contributions from cast members past and present including David Neilson, who plays Roy Cropper, Patti Clare, who plays Mary Taylor, and Thelma Barlow, who played Mavis Wilton.

In this week’s scenes Ken confides in Rita that Norris wants to meet up as he has important news.

However they’re shocked to hear from Freda that Norris has collapsed. She tells them Norris has been taken to hospital with a suspected stroke.

Ken, Rita and Mary arrive at the hospital to be met by Freda, who is clearly upset.

She breaks the news that Norris died half an hour ago.

Ken reveals that Norris wanted to share some important news with him.

When they argue over where’s best to hold the wake, Rita soon steps in and asserts that Norris would choose the street.

As the row over Norris’s funeral escalates, Mary announces she’s stepping down so Freda can sort out the funeral herself. Gemma worries when she learns it clashes with Aled’s operation.

Gemma breaks the news to Freda that she can’t attend Norris’ funeral as it clashes with Aled’s operation.

Freda warns Gemma that by giving Aled cochlear implants, they’re changing his identity. However Gemma assures her that’s not the case.