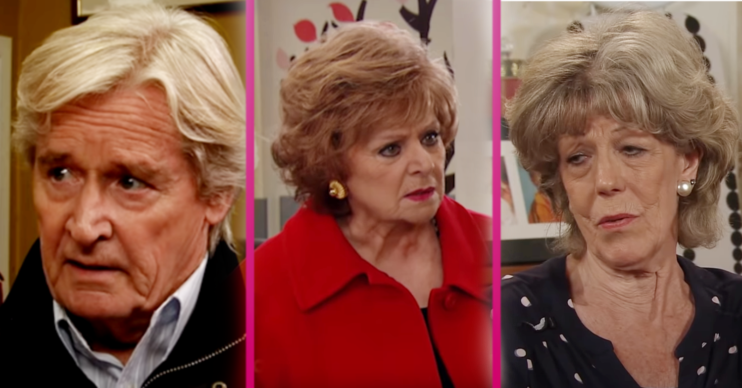 These characters have been off screen for some time

Currently child actors and actors over the age of 70 have not yet returned to filming due to coronavirus.

However executive producer Iain MacLeod confirmed three of the shows older characters, Ken Barlow, Rita Tanner and Audrey Roberts will be back for the anniversary.

Speaking to Entertainment Daily and other media in a Zoom press conference, he said: “Ken, Rita and Audrey will be back on screen in time for the 60th – and indeed in the 60th episodes themselves.

“That’s good news for everyone who loves the show as much as we all do.”

Coronation Street: Iain rules out other past characters making returns or cameos

However, he ruled out any other past legendary characters coming back.

Ken, Rita and Audrey will be back on screen in time for the 60th.

Iain continued: “In terms of whether there are any other returns mooted, the answer to that has consistently on my part been ‘no.’

“I love our cast, I think we’ve got an incredible bunch of legends that are already in the show. Just having a revolving door of cast that are coming in to do cameos, just for a brief moment of the audience going ‘oh wow, it’s them’, would have felt a bit like a cheap trick, dare I say.

“I’ve got no plans at all, and in fact we’re past the point where I could develop plans, to have returning cast doing cameos.

“Our current cast is fabulous and we’ve got enough legends in the show already without adding more.”

Are you glad Ken, Rita and Audrey will be back for the anniversary? Leave us a comment on our Facebook page @EntertainmentDailyFix and let us know what you think of this story.