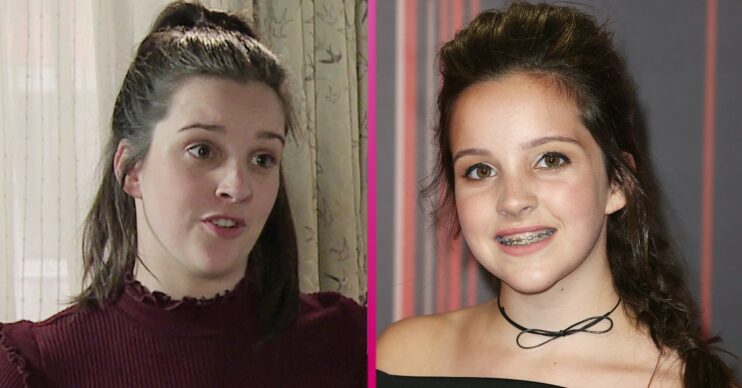 Elle's character Amy Barlow is involved in a huge storyline

Coronation Street star Elle Mulvaney, who plays Amy Barlow, looks unrecognisable as she shares photos from a night out with her friends.

Elle, 19, shared the pictures to her social media. In one picture she’s taking a mirror selfie with a friend and in another, she can be seen sitting a table enjoying drinks with her friends.

Recently it was revealed to Corrie viewers that Elle’s character Amy is dating Jacob Hay.

Jacob was the drug dealer who got Amy’s cousin Simon into delivering drugs. However Jacob claims he no longer has any involvement in drugs.

Tonight Amy, Asha, Aadi, Summer and Jacob decide to go to a club after the Valentine’s dance.

At the dance Daniel heads over to chat to Amy and her mates, but when he realises they’re drunk he orders them to leave.

Later Amy, Asha and Aadi meet Jacob outside the club. Inside the club Amy becomes increasingly woozy and collapses.

Asha calls an ambulance while Jacob puts Amy in the recovery position.

At the hospital, Steve and Tracy are in shock.

Asha and Aadi approach Steve in the hospital and assert is Jacob’s responsible for Amy’s condition, he’ll make sure hers is the last life he every destroys.

Jacob reckons someone spiked Amy’s drink before she got to the club.

Steve tells Asha and Aadi that Amy’s blood tests show she’s taken GHB. Steve is convinced Jacob spiked her drink but Jacob tells him that he and Amy are together.

Will you be watching this week’s Coronation Street? Leave us a comment on our Facebook page @EntertainmentDailyFix and let us know what you think.