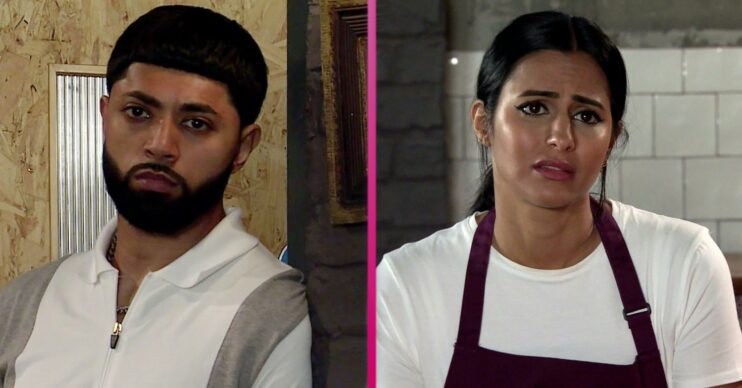 Alya is stressed when the food delivery for Speed Daal is late.

As Elaine tries to calm down the diners, Alya juggles a call with the delivery driver and another from the bank.

The delivery finally arrives but Alya’s relief turns to horror a customer points out a tarantula is crawling across the table. It turns out the tarantula escaped from a boy’s rucksack.

The diners flee and Alya tries to stay calm as the boy searches for his pet.

With the spider finally caught, a tearful Alya tells Elaine that Yasmeen has somehow managed to empty their bank account.

Later Alya is horrified to learn that the call she took earlier wasn’t from the bank, but from a fraudster.

She unwittingly allowed them to clear out the account, not Yasmeen.

Desperate and not sure what else to do, Alya leaves a voicemail for her brother Zeedan.

She tells him she’s been scammed out of thousands and doesn’t know what to do.

Soon Zeedan turns up at Speed Daal and Alya is forced to explain her mistake to Yasmeen.

Zeedan offers to transfer £50k to tide her over.

What brings Zeedan back to the cobbles?

Last month it was announced that Zeedan would be returning to the cobbles after three years away.

It was revealed Zeedan arrives in Weatherfield for his grandma Yasmeen’s birthday.

However he’s shocked to discover the business is in serious financial trouble after his sister Alya fell for a bank scam.

Alya is desperate to keep the truth from Yasmeen. But she’s suspicious when Zeedan offers to bail her out.

When two thugs attack Zeedan in the street she can’t help but wonder if the beating has something to do with his new found wealth.

Why has Zeedan left his new wife and decided to settle back into Weatherfield? Where did the money come from?