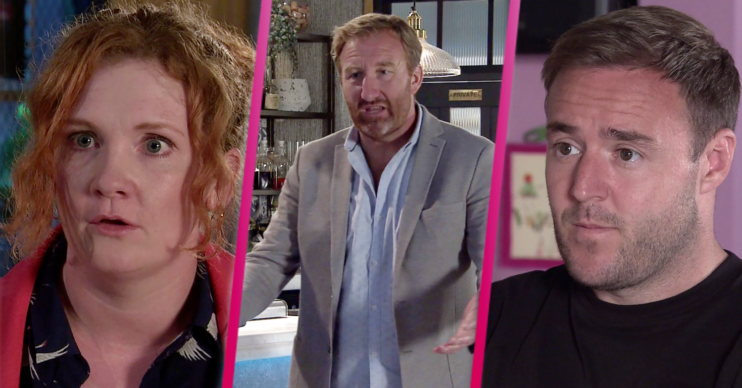 Coronation Street spoilers for next week reveal Phill comes back to the cobbles to see Fiz.

As romance brews between them, jealous Tyrone makes a discovery.

In next week’s scenes, Tyrone struggles to muster up any interest in Alina’s Romanian wedding plans, especially when he finds Fiz crying.

She tells him that there’s a petition to have Hope removed from school.

Hearing what’s happened, Phill calls on Fiz to see how she is. He suggests they have a bite to eat.

When Evelyn tells Tyrone that Phill came to see Fiz and has taken her to the Bistro, his jealousy is evident.

Unable to help himself, Tyrone follows them and when Phill goes to the loo, Tyrone blurts out how much he misses her and the girls.

As Tyrone reveals how much he enjoyed their kiss and how his engagement to Alina was an accident, Fiz listens in disbelief.

Later Tyrone tells Alina that Fiz is thinking of moving away with the girls and he can’t possibly go to Romania with her at the moment, leaving her hurt.

In the factory, Michael advises Alina to cut Tyrone some slack as his kids will always come first.

Fiz calls Tyrone as Hope refuses to go to school. When Alina asserts that once they’re married she’ll be a firm but fair stepmum, Tyrone can’t look Fiz in the eye.

After telling Alina she hates her for stealing her daddy, Hope pulls the damaged Teddy from her bag.

She admits she stole it and says she’s sorry about the fire.

However when Hope reveals she’s sorry for all the other fires she started too, Alina is horrified to realise this wasn’t the first time.

At home she rails at Tyrone for keeping secrets as Tyrone battles his guilt.

Alina is left heartbroken when Tyrone admits to her that he wants to get back with Fiz.

Confiding in Emma, Alina tells her that Tyrone wants to be with Fiz.

Meanwhile Fiz meets with Phill again. She tells him about her and Tyrone’s kiss, but also that it made her realise that she no longer as feelings for her ex. Phill breathes a sigh of relief.

As Alina dumps her and Tyrone’s couple picture at the garage with the word ‘liar’ scrawled across Tyrone, she ensures a very public humiliation before climbing into a taxi to leave.

As Fiz and Phill head to the Bistro, can Tyrone convince Alina to stay?

Having found out Alina is yet to fly, Tyrone races off to find her.

Having tracked her to a hotel, he asks her to reconsider. Alina makes out it’s over between them, will Tyrone accept this?

Tyrone makes a discovery about Phill?

Read more: Why is Coronation Street no on tonight and when will it return?

Later Phill drops his car off at the garage and a jealous Tyrone searches it, hoping to find something to discredit him.

When he discovers a napkin with a woman’s number scrawled on it, he pockets it.

Tyrone arrives to look after the girls but as Phill arrives for a glammed up Fiz, his jealousy becomes evident.

Tyrone then reveals he saw the napkin and knows about Brigitte.

Who is Brigitte? Will Phill be able to explain himself?