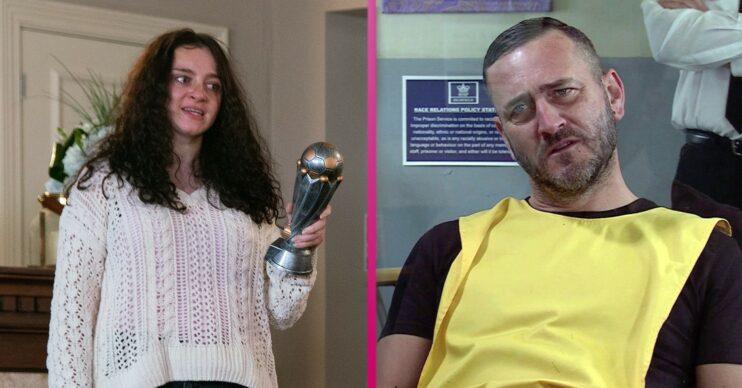 Will Nina go after Corey?

Meanwhile Nick, Leanne and Simon return to Weatherfield, but are they still in danger?

Nina returns home from being out all night again leaving Roy worried.

When Nina is ill prepared for a meeting at Underworld, she tells Sarah to stick her job.

In the Rovers she drinks with a much older guy called Hughie, who she met in town the night before.

Daisy is disapproving of Hughie and he soon suggests to Nina that they go back to his hotel.

Daisy confides in Abi about how she’s worried about Nina. In the hotel bar, Nina sees Tommy Orpington at a table with Corey.

As Tommy shows off Corey’s ‘Best New Talent’ award, Nina tells Tommy about the attack and how Corey kicked her boyfriend to death.

As they go to leave, Nina picks up the award and follows them, but what will she do?

He tells her how important her evidence is in order to put Harvey away and prevent him from ruining more lives. Will Leanne agree?

In prison DS Glynn goes to see Harvey and tells him that his intimidation tactics won’t work and the witnesses won’t be swayed.

Tyrone makes a fool of himself?

Emma invites some friends to the Bistro for a cocktail evening that Curtis is running.

Fiz’s heart sinks when Alina arrives dressed to the nines, closely followed by Tyrone in his new skinny jeans.

However Fiz ends up having the last laugh.

Summer is given a diagnosis

Read more: When do new episodes of Coronation Street drop on ITV Hub?

Summer is diagnosed with stress and anxiety.

Coronation Street airs tonight (June 17) at 9pm for an hour on ITV.