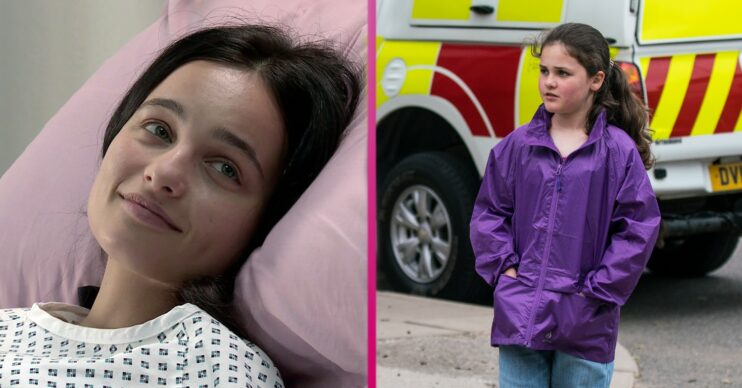 Alina is in hospital after the fire

Meanwhile George asks Eileen on a date, and Aadi admits he has feelings for Summer.

Alina is shaken after her ordeal. As she sits up in her hospital bed, she assures Tyrone that she and the baby are both fine.

In the café Tyrone and Evelyn discuss the fire and the possible causes.

Hope is quick to point out that Alina was alone in the flat so the fire must be her fault.

Outside the salon flat, the fire investigation officer tells Tyrone that it seems the fire was started by an aromatherapy candle. Alina is horrified that she caused the fire with one of her candles.

When Evelyn and Hope clock Craig talking to the fire investigation officer, Hope questions whether the person who started the fire will get into trouble.

Evelyn’s suspicions grow and she suggests to Fiz that Hope may know more about the fire than she’s letting on.

Fiz is shocked and immediately jumps to her daughter’s defence.

At the salon flat, Alina is devastated as she realises all the things she’s brought for the baby have been destroyed.

Having gone over the officer’s findings in her mind, Alina tells Tyrone that in order for the fire to have started in the cot, someone must have moved the candle.

George finds Eileen in the cafe and after admitting he’s taken a shine to her, he wonders if she fancies dinner at the Bistro. Eileen accepts his offer.

However when George overhears her telling Mary that she isn’t sure that she wants to go out with someone who handles the dead for a living, George sends a text cancelling the date.

Furious, Eileen has a go at George for cancelling their date. But when George reveals that he overheard her telling Mary that he makes her skin crawl, Eileen is mortified.

Mary soon hatches a plan to get them back together, prompting George to suggests to Eileen that they try again. What will she say?

Nina calls round with Summer’s dress and Billy is saddened at the reminder of his cancelled wedding.

Summer tries on the dress and worries she looks fat. When Aadi calls round with some diabetic friendly cookies and admires her dress, Summer is touched.

When Aadi reveals how much he’d miss her if something happened to her, Summer admits she feels the same about him.

However Aadi becomes flustered and heads out, leaving Summer confused.

Later Aadi confides in Dev that there’s a girl that he fancies. Dev urges him to pluck up the courage to tell her how he feels.

When Aadi confides in Amy that he wants to ask Summer out but doesn’t know how, Amy offers to coach him.

When Tracy suggests that Aadi is her boyfriend, Amy puts her straight, but Tracy isn’t convinced.

In the factory, Sally, Kirk and Beth fret about Izzy. Sarah tries to put things right.

Carla and Sarah bury the hatchet and call Izzy to apologise.

Izzy finally opens up to them both and describes the pain, fear and loneliness suffered during the pandemic.

Fergus gives her a hug and Izzy gives him a grateful smile.

Meanwhile Peter tells Carla that he sees his new liver as a new beginning and fancies a change of career.