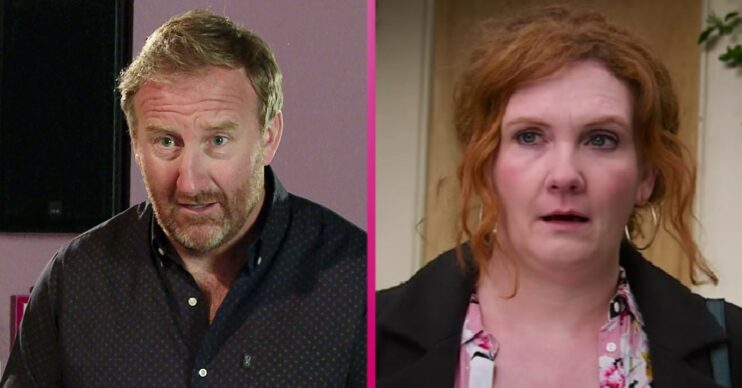 Meanwhile Maria fears she’s being followed after finding a tracking device in her bag and the Platt family have a huge falling out.

Phill seeks Tyrone’s advice about how to make sure Fiz knows exactly how he feels about her.

But Fiz gets a shock when Phill turns up outside Underworld with a boombox blaring.

He begins holding up cards containing the words of Fiz’s favourite love songs, but to the amusement of the factory employees, he gets the cards muddled up.

Sensing Maria is nervous about going to lunch meeting on her own, Kelly offers to go with her.

At the lunch Maria is shaken when a man called Jimmy approaches her and warns her to keep her nose out of matters she doesn’t understand.

But things go from bad to worse when a creepy guy comes up to her and tells her how much he enjoyed her online video.

Later she walks down the street and gets a notification on her phone saying that she’s being tracked.

When Gary calls his wife, a petrified Maria tells him that she thinks she’s being followed.

Maria is terrified and looks through her bag for the tracking device.

When she hears footsteps behind her she grabs a can of hairspray and turns around.

Later Maria finds the tracking device in her bag and destroys it.

Maria and Gary report the tracking device incident to the police.

But later Maria draws the blinds before dinner, convinced someone might be watching them.

In the Bistro Gail hosts a family lunch to welcome Stephen home. But it soon turns into chaos when David and Sarah start an argument over Audrey’s money.

Disgusted at their behaviour Audrey walks out and Stephen is embarrassed.

Sally suggests to Tim that he listens to Sting’s interview about tantric sex as it could be the key to a successful love life.

Tim prepares a romantic meal for Sally and tells her he’s feeling more positive and reckons it won’t be long before things are back to normal in the bedroom.

Ronnie has an idea

Later Ronnie shows Ed and Paul a photo of a derelict pub and suggests they buy it together, knock it down, and turn it into houses,

But will Aggie agree?