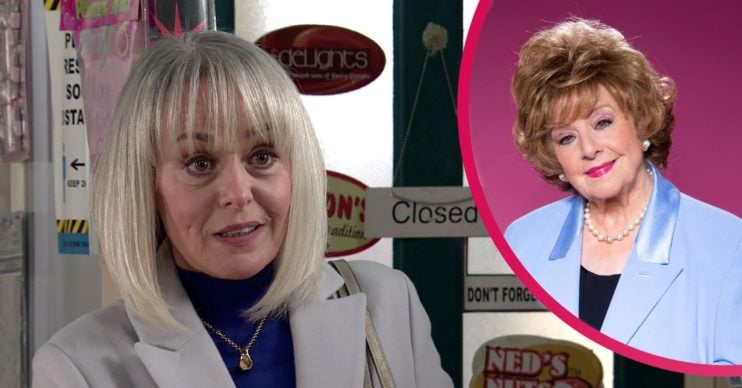 Coronation Street spoilers reveal Sharon Bentley returns to the cobbles. But she soon has some devastating news.

In next week’s scenes Brian is in the Kabin when he receives a call claiming that Rita has been nominated for a Golden Heart Award.

But Brian assumes it’s a hoax cooked up by one of Cathy’s trolls.

He calls at No.6 and tells Cathy that it turns out the award is genuine, the trolls have disappeared and it’s time to come home.

Meanwhile, as Gemma and Rita chat in the Kabin, they’re interrupted by the arrival of Rita’s former foster daughter, Sharon Bentley. Rita is stunned to see her again.

Sharon reveals that she nominated Rita for the Golden Heart Award for her fostering skills. She says she also wanted to prove how sorry she is for how she treated her all those years ago.

In the Rovers, Rita and Gemma listen as Sharon reveals she had cancer and her husband Ian ran off with a woman he met online.

Rita introduces Sharon to Jenny, explaining she fostered Jenny too.

But Jenny convinces Gemma that Sharon can’t be trusted and intends to fleece Rita.

Sharon informs Jenny and Gemma that Rita missed out on the award. But soon they make it clear to Sharon that they won’t let her hurt Rita and she needs to sling her hook.

Rita tells them both she’s aware of Sharon’s shortcomings. However she says everyone deserves a second chance. Jenny and Gemma are reasonably chastened.

At Rita’s insistence, Sharon, Jenny and Gemma gather in the Bistro for peace talks.

Read more: How old is Antony Cotton and is he married? Coronation Street star is on Britain’s Brightest Celebrity Family

Agreeing they all feel like Rita’s daughters, the three women decide to bury the hatchet.

But as their meal comes to an end, Sharon tearfully reveals that her brother Wayne died and she feels terribly lonely.

When Rita suggests she moves in with her for a few weeks Sharon is thrilled. But what will Jenny and Gemma think?